This is a study of a series of Rat's-tail Orchids which I was shown by Alan Stephenson, near Jervis Bay (south-east from Nowra). These were flowering on 27 July 2009. Despite the name the plants are lovely, and were conveniently, flowering at head height, as epiphytic plants, growing on coastal sheoaks, themselves growing close to a tidal stream.
Flowers being photographed by Alan Stephenson, at head height. 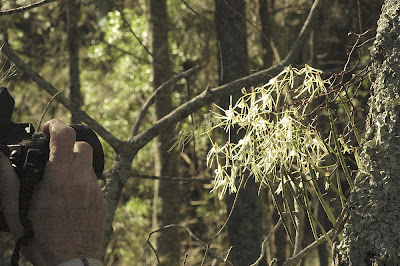 The terrible-sounding name is quite descriptive of the leaves, which are very long and rounded in cross-section (terete). The leaf shape is the reason for its scientific name Dockrillia teretifolia (formerly Dendrobium teretifolium).
Click to see the leaves in detail.
The tidal creek is visible in the background, below the flowers. 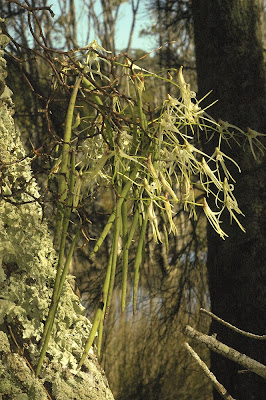 I shall shall show a series of studies of the flower shape, as the flowers develop.
Here is a bud - tight, and unopened. 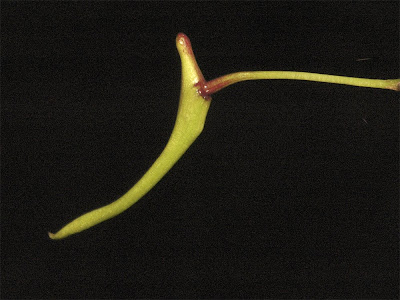 Here is a half-opened flower.
The labellum is starting to curve back. 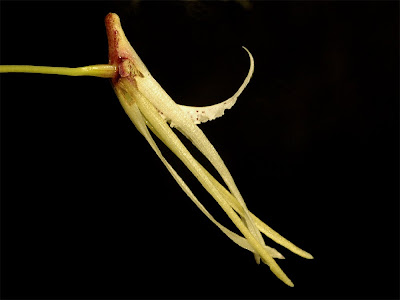 Here is a fully matured flower - viewed from the side. 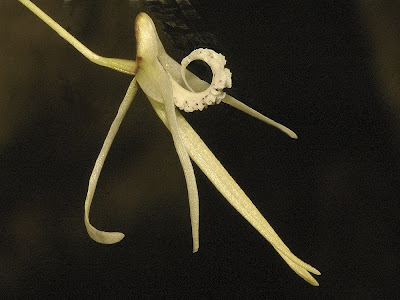 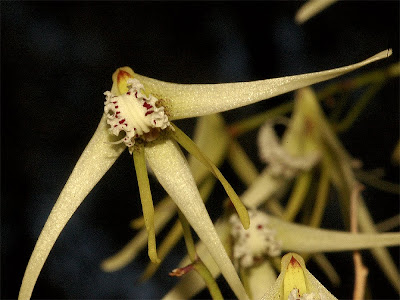 Mature flower - viewed from a low angle to see inside the flower.
(Click to enlarge).
The column and the flap which covers the pollinia is clearly visible.
This group of Orchids hold their flowers "upside down"
meaning that the labellum is above the column.
In Botanical terms, these flowers are "Non resupinate". 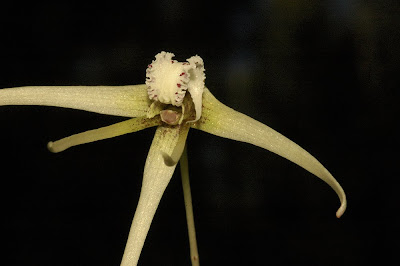 Here one can see the roots of the orchid growing underneath the thick grey-green lichen which is growing on the bark of the Casuarina trees. These roots travel a considerable distance on and under the bark of the trees. I have seen Orchid roots (of this species) growing nearly 2 metres down the length of a Casuarina, even under the dead bark on an old tree, which was still standing, but dead. In that case, without there being any shade, and the bark being dead, it had lifted free from the wood of the tree trunk, and the Orchid roots were thriving underneath the cracked and lifting bark.

This plant is a close relative of the much smaller "Streaked Rock-Orchid", Dockrillia striolata (or Dendrobium striolatum , if you prefer), which I have photographed growing on the rocks above Macquarie Pass. Although much smaller in size, the flower and leaf shape is very much the same - revealing the close relationship between the two plants - even though one grows on rocks and the other on trees.

UPDATE:
Since I posted this Allen, from "Green Bites - News from Wild Wings and Swampy Things" has posted a matching blog entry of the tropical relative of this plant. His is Dockrillia calamiformis, but it was originally classed as a sub-species of Dendrobium teretifolium (same as today's plant) until both species were reclassified as different Dockrillia species. There are marked similarities, especially in the leaf form. Allen's plants are extremely floriferous.
Posted by Denis Wilson at 8:45 pm

Hi Denis, In the North this group of Orchids are usually called Pencil Orchids which I find much more pleasing. They are after all most attractive when in bloom and our Dockrillia calamiformis (Dendrobium teretifolium)has a nice scent as well. They are also just comming into bloom at the moment
Allen

Thanks Micj and Allen
I agree "Pencil Orchids" is much nicer sounding.
I realised afterwards that I had not noticed any perfume. Shame on me.
Even the tiny D. striolatum has a sweet perfume. Why wouldn't these ones? They probably do.
Denis