The Triumph of the Robertson Show

Over the last two days there has been a village full of "winners" in Robertson (award winners at the Show are legion, because of the nearly endless lists of "categories" for which prizes are awarded). However, my vote for the biggest winner, in the sense of achievement goes to this young girl who gets my vote for the "Littlest Winner". Make no mistake about it, she is also the "Biggest Winner".

While all the "Juniors", mostly big strong youngsters were getting ready, this little girl, who was fully registered (she had the sponsor's "Rentquip" T-Shirt on, and the compulsory wrist band) calmly walked up beside the Potato Truck, to ask for her 20 Kilo bag of Robertson Spuds to carry around the oval - a standard 400 metre course. 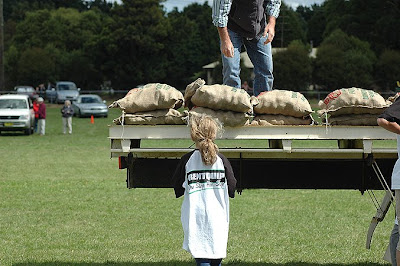 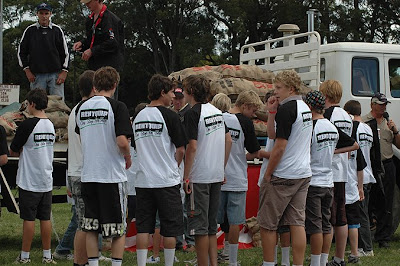 One of the attendants, however, very carefully assisted the littlest competitor. He obviously knew that the key to success lies in the hand-grip of the corner of the Potato Sack. 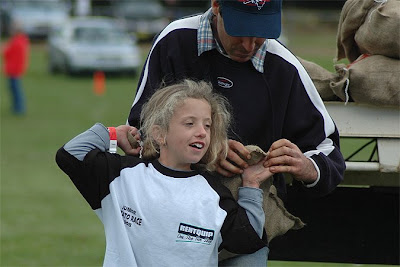 He made sure the little girl had a really good grip on the corners of the bag. 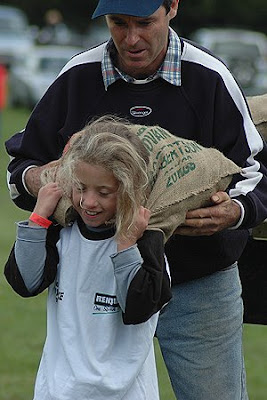 He then checked her balance, before allowing her to steady herself, under the weight. Have you got it? OK - You're ready! Then she launched herself. 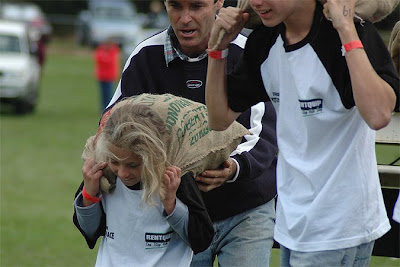 At this point she walked to the starting line, and the crowd was calling out things like "Its not fair", and "Child Labour went out in the 19th century"!

The Stewards realised they needed to make some attempt to handicap the race, to give this little one some chance. They decided to allow her to start about 100 yards along the track. But she still had to walk down the track to the new starting mark, carrying the sack all the way, on her shoulders. Pat Cleary, one of the Stewards for the event went with her.

Then the Starter's hat was dropped to the ground (the signal for the start of the race). The boys were off down the track, in a cloud of dust. 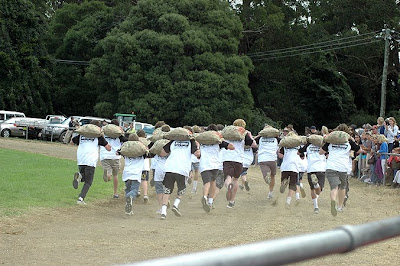 What happened next was a total surprise. while the race caller up in the tower was telling us who was in the lead, as the boys approached the far side of the field (out of our view), suddenly the little girl was seen trotting steadily across the middle of the field. She was taking a "short cut". Clearly the artful Mr Cleary had put her up to this "lurk". The official track is just inside the rails, visible on the far side of the oval, beyond the cars. 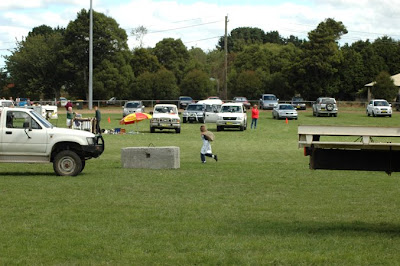 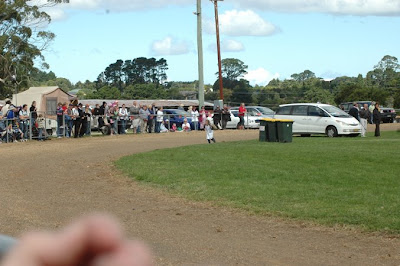 We had a bit of a giggle when we realised that there was a "lurk" being pulled here. But did we care? Not a bit of it. This little tot was working just as hard as everybody else, just the course was shortened for her, in proportion to the shortness of her legs.

The crowd started to get behind her, when they realised a giant "upset" was about to occur. But could she possibly keep it up? Could she make it? It seemed unlikely, really, given her tiny size. 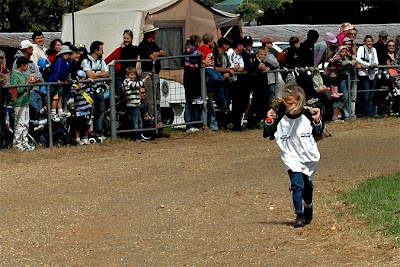 But as she drew closer, we could see the determination on this kids face. Her muscles were screaming, but her legs kept moving, and those hands never let her grip slip one fraction. She had about 50 metres to go at this stage, and it was clear she was going to win, if only she could make it to the finishing line. The "pack" was well behind, even though the two leaders were in fact gaining on her rapidly, a mere 40 metres away, at this stage. 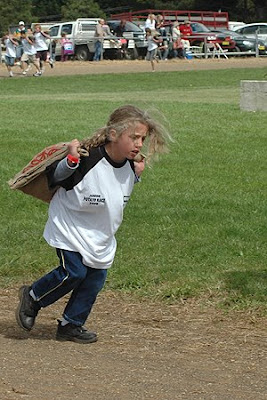 She has made it back to back of the the Potato Truck, and the starting/finishing line was at the front end of the truck. Its just a few tired steps away. The crowd was going wild at this point. Cheering, clapping, and laughing like crazy things. 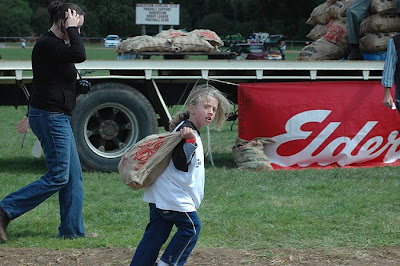 First things first, lets just check she is all right, and can she get her breath back?
Are you OK, dear?
Course she is. She's tough, this little one! Still puffing, but why wouldn't she be? 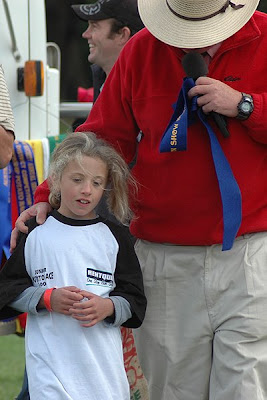 And now for the moment of truth. The judges decision (a very popular one indeed) was to declare out littlest competitor the "Half-Course Potato Race Championship Winner". And a winner she was and is, in every sense. Pat Cleary (in red) made the official announcement, to a roar of approval from the crowd. Bruce Knight, in the background, is adding his own inimitable commentary. I suspect the lady in black, in the background, might just be the proudest Mum in Robertson (but I don't know that for sure - its just a guess on my part!) 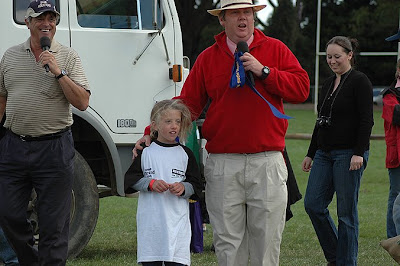 For me, this result was far and away the standout of the entire Robertson Show.

Who officially won the Junior Potato Race? I don't know. I don't have a photograph of the official "winners", unfortunately. Their names will be recorded in the Show records, no doubt. But this "Littlest Winner" is the "Biggest winner of all".

Congratulations to her - from the crowd, from the People of Robertson, and I am sure, from all the readers of this blog!
Posted by Denis Wilson at 8:39 pm

A Great story on the show Denis!
Robertson show is still an expression of the character of the town...warm hearted, generous and supportive of the battler.
Who'd want to be anywhere else...eh?
Cheers,

Thanks for the prompt comment.
As you know, I was really impressed with this girl's effort, and I hope I did justice to it in my little photo-essay.

I agree, Robertson has some great aspects to its community life. I know there are down sides to it too, but the Show seems to bring out the best of it. So, I decided to celebrate that.

Did you make it to the Fireworks? I saw a searchlight in the sky, but I did not hear anything from my house.

Hi Denis,
Made it to the Derby and the Fireworks with a few shots on my blog. I linked back to this story.

Effort should always be rewarded, and that young girl deserved the recognition, for the effort of the race is clearly visible in your photos.

The Spud Race, all 3, is one of the Great Sporting Things of our time and our little town..your description brought a tear to my eye ! The fireworks were totally, unexpectedly, Brilliant, and made by someone local I heard, cheers Penny

Hours of reading for me here!

I really enjoyed your account of the Children's Pet Show and Tas and Lena's success regardless of the late entry fee!

Nice to have you on board. Thanks. I have published a few items on Moths and Butterflies as well. Many moths, as this area is really big on moths, and their hairy caterpillars. Check the "labels" on the side column, and also you can use the "Search this blog" function.
Glad you liked the human interest stories as well as the biological stuff.