Here are some photos I took on Christmas Day, when at "Cloud Farm". Several are of garden plants, but several are of weeds (such as the Dandelion seed head from yesterday). I do not mean to create the wrong impression by showing lots of weeds, but several of these images are of weeds which just happen to be remarkably beautiful flowers.
Blue Convolvulus - a popular garden plant. 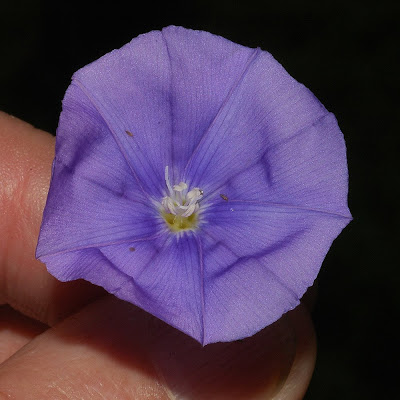 Pink Marguerite Daisy - with a strange combination of pink and orange colours. This serves to remind us that Nature can make up its own "rules" for colour combinations, and get away with it. 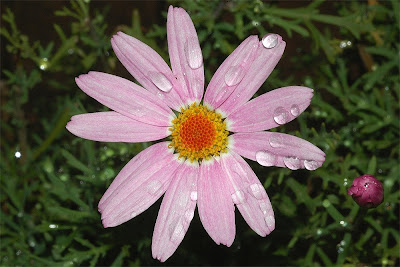 See what I mean? This is the "Eye" of the Marguerite. This is a larger image than I normally upload - so click to enlarge it, to see the finer details of the flowers.
Yes, I meant to say "flowers", for the "centre" of all "daisies" is actually a composite flower, made up of many individual flowers. If you enlarge the image you will clearly see the see regular 5-sided flowers around the edge of the orange centre of the "flower". The orange "buttons" are simply "as-yet-unopened" buds of even more flowers. 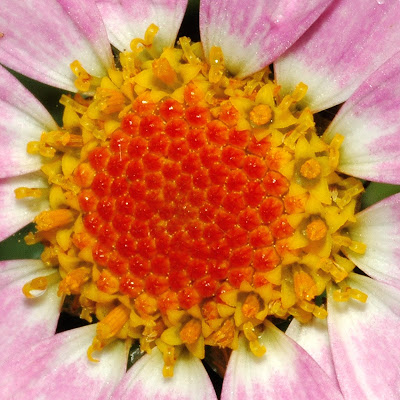 Here is a Scotch Thistle, yet another "composite flower". It is a truly beautiful flower, despite being a terrible weed in Australia. 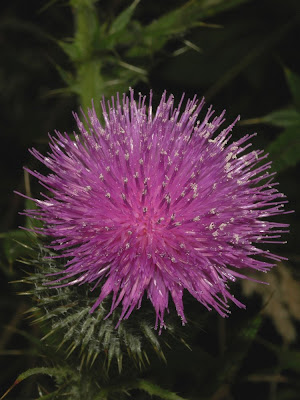 And there is also a remarkable creature - a Stick Insect, which is a "pet" (called "Celine"). But it warrants examination for its strange details. The Existentialist reader will be asking: "Strange" - compared to what? Have a look - I think you will get my point.
This Stick Insect is quite different from two other Stick Insects which I have written about previously - both Australian, but only one was a local "wild" individual. It seems these Insects are popular for study in schools and universities.
This insect is Carausius morosus - the "Indian or laboratory stick insect". (*** PLEASE SEE CORRECTION UPDATE BELOW) The body is arched up and forward, (though it does not carry itself that way when "relaxed". The body of this insect seemingly bends in the opposite manner to the way a Prawn might be "folded". As it has no "stinger", this is not the same purpose as a Scorpion's favourite body position when arming itself for attack, although the angle is superficially similar.
Note also the small wings, which are just forming - above the front legs. 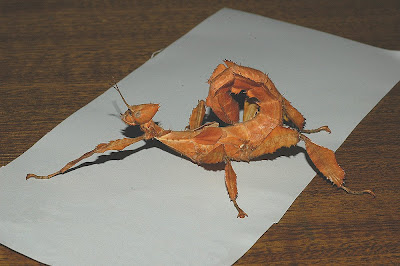 I was particularly intrigued with the head form, especially where the neck enters the head. Of course, being a vertebrate myself, I assume that all creatures ought be designed around a "spinal cord". This creature is an invertebrate. Maybe that makes a difference in the way in which this insect's head can be "wired up". 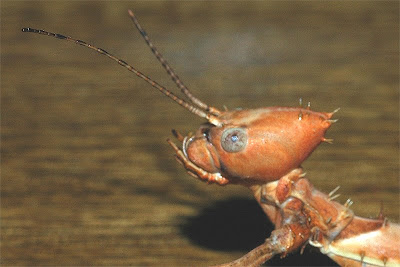 This insect looks to me as if it is designed by the people who designed those toys called "Transformers" Check out the details of the leg shape, seeming to aid its leaf camouflage. 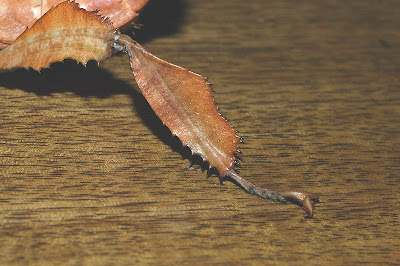 The feet are interesting "V shaped" claspers. No doubt very effective in helping the insect to hang on to vegetation high in a tree, under windy conditions.
CORRECTION AND UPDATE
I have been advised by Martin Lagerwey that this insect is a "Spiny Leaf Insect" (Extatosoma tiaratum). It is a native Stick Insect.
"It is covered in sharp spines and the legs have flattened leaf-like projections. The head has an odd pointed cone shape and looks like it is on back to front. Males have much slimmer bodies, and two pairs of fully developed wings and can fly. Females have stout abdomens, a single pair of tiny wings and cannot fly. They rely on camouflage to avoid predators, looking like a stick with leaves. When disturbed they can strike out with their spiny legs. They often curl the end of their abdomen over their back like a scorpion. The Spiny Leaf Insect is a popular insect pet."
Other Names
"Giant Prickly Stick Insect, "Macleay's Spectre"
"It is found in coastal regions of Queensland and northern New South Wales."
Source: http://www.ozanimals.com/Insect/Spiny-Leaf-Insect/Extatosoma/tiaratum.html
Thanks to Martin Lagerwey for providing the correct information.
He has a private website with information on many Stick Insects and other creatures.
http://martinsinsectworld.biz.nf/sticks.html
As regular readers would know, I do the best I can to correctly identify any creatures I find.
I am always happy to get correct information, when my insect ID is incorrect.
Denis Wilson.
I may be contacted via the "comments" facility, or via email, from the My Profile page.
Posted by Denis Wilson at 10:06 pm

What a fantastic creature Denis, thanks for showing us.

Yes, I was pretty amazed, when I saw it. I have seen the much larger Goliath Stick Insects (also as a "pet"), but it did not prepare me for this creature.

Glad you thought it was interesting too.