Sticky nights bring out the moths.

Two evenings ago we had a large thunderstorm to the south of Robertson. This is a slow exposure shot, showing the effect of sheet lightning. The large power stanchion is clearly visible against the dark sky. That is visible in most daytime shots from my back deck.

All these images are easier to see in full detail, if you click on the images, to enlarge them. 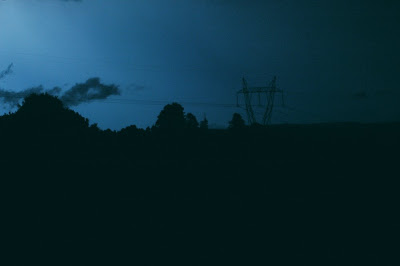 The storm seems to have been centred around the Budawangs, due south of Robertson, about 100 Kms away. I say that, because there has been a large fire there burning over the last 36 hours. The fire is north of the Kings Highway, which runs from Braidwood, over Clyde Mountain, to Batemans Bay. I have written about the Budawangs before, with some shots of the wonderful mountains there. It is very difficult and remote country for firefighting. 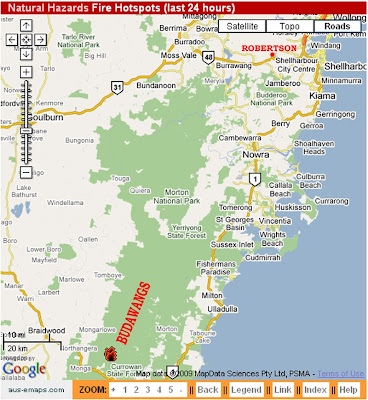 Robertson has had hot days and very sticky nights. The storm brought out the moths, and one determined Huntsman Spider, which was sucking dry this medium-large moth. Eventually the spider dropped the dead moth, after the spider had feasted enough. At this stage the spider was gripping the moth's wings tightly to prevent it flapping too much. Now you know why Spiders have eight legs, to allow 3 legs to hold their victims, and 5 legs to hang onto a vertical wall, and not fall off. Not a bad effort, really, for this spider (which incidentally is back out there near my front porch light, as I write, two days later). Why not? Its a good hunting ground, obviously.

Here is another moth (a different species) which I have not yet had the chance to "look up".
DJW Update: My Blogging colleague, Duncan, has kindly told me that "The one with the eyes is Oenochroma quardrigramma" (in the Geometridae). It took me a few moments to realise he was referring to the "eye markings" on the wings of this moth, below. Thanks Duncan. 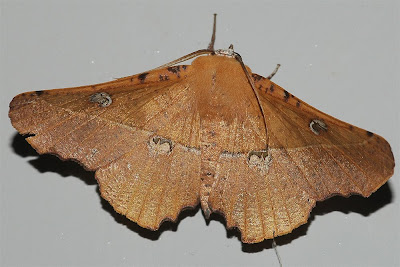 Here is the same moth viewed from the front and side.
It has a good chubby body, which, surprisingly does not seem to be very hairy.
The "head and shoulders" (forgive my poor moth anatomy - its too late) is very hairy.
The bronze coloured hairs are clearly visible in the image above, too.
This next moth (about 2.5 cms long) is a beautiful silvery creature, with a small yellow stripe on its head, and yellow marks on its front legs. Click on these images, to see them closely.
I have seen other silvery moths before, which were "Rice stem borers" (or similar) on rushes in a swamp, but there are no swamps close by my place.

DJW Edit: It seems this may be Eochrois callianassa, which is in a group of ""Concealer moths" - a name given because of the habit of the caterpillars to hide in either cases, or canopies of leaves sewn together with silk. Don Herbison-Evans has a photo on his site which looks similarly silvery to my moth. He notes that "The adult moth has white forewings shading to yellow at the edges". That matches my specimen. It feeds on members of the Proteaceae, of which there is only one species native to the Robertson Rainforest - a tall tree - Stenocarpus salignus. But of course, many members of this family are grown as garden plants.
Here is the same moth from the front.
You can see the long antennae and the upwardly curved palps.
What puzzles me his the apparent absence of eyes.
Presumably they are underneath the antennae, held low down.
And from the side it looks like this.
You can just make out the eyes in this shot -
tucked behind (and above) the base of the curved palps.
I do not know what the little dark spot is on the side of the head.
This is the same species of moth as the Huntsman Spider had caught.
A different individual, though.
Possibly Anthela acuta. See Duncan's gallery image.
Click to his two previous images as well - use the left arrows. 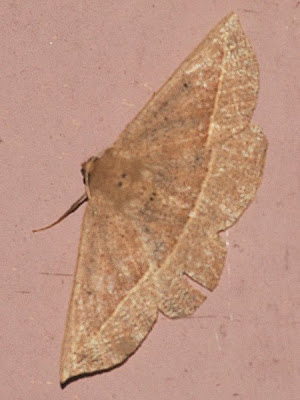 And here you can see its eyes (large ones) and its front legs.
The antennae are long, but held parallel to the front edge of the wings. 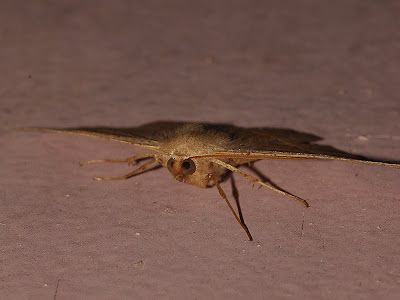 I doubt that these moths are rare, I simply have not had a chance to go searching through my Nature Blogger colleagues image galleries of moths to sort out what species these are.
Posted by Denis Wilson at 11:59 pm

That's a fantastic night-time shot of the storm. Beautiful!

Nice moths Denis, the one with "eyes" is Oenochroma quardrigramma, Geometridae.

Hi Mick and Duncan
Mick, the image was "hand held", but resting on a balustrade, on my back deck. 8 second exposure, and just waited for a flash to occur. It was bright enough to create an image. I got no "shake" visible, for the rest of the time that the aperture was open, the sky was black.
I liked it.
Duncan, thanks for the ID. I went looking for an image of yours, but could not find one. From the sound of the name, (Oenochroma) they sound like they should drink a lot.
Maybe they are pests of vines?
.
I did find some Anthela acuta images on your Gallery which are a good match for the one the Huntsman was eating (and another live one). Much appreciated.
Cheers
Denis

G'day Denis,
Nice work. Great detail in some of those moth images. Look out though, how many Australian moth species are there?
Hope you stay safe from any nearby fires.
Regards,
Gouldiae

These are great shots, Denis and I'm glad you were able to put names to faces. Well done.

Hi Gouldiae and JL
Thanks, both of you.
The fires are distant and remote (if you know what I mean by that last word) - its back country, where nobody lives - very rugged. Tough for the Kangaroos, though. Most native plants are better adapted to fire.
I had direct help from Duncan, and also virtual help from Mosura and Don Hobern's image sites, and the Aussie Moths and Caterpillars site which Don Herbison-Evans runs. They are all linked from my front page: "Reference sites, Insects and Spiders". Of course, I do not know if the IDs are good, though. I am just working on a "looks-like" basis.
Cheers
Denis