Two days ago I published a post proclaiming that I had found a "new" Midge Orchid - new for me - that is.
Right and wrong.
Ah, the perils of Blogging, folks.

Yes I had found a "new species for me"
but unfortunately I had given it the wrong name.
I had proclaimed that the species was Corunastylis filiformis. My Orchid-chasing colleague Colin Rowan (from RetiredAussies.com) emailed me to ask "are you sure?"
My answer was that NO, I was NOT SURE.
(I became less sure as I looked further and further into the original ID)

We swapped notes and I also communicated again with Alan Stephenson, who was able to provide a copy of the Orchadian description of another species, Corunastylis formosa, which, from P. 180 of David Jones's big Orchid book, looked a "better fit" with my plant.
This is a copy of that illustration by David Jones,
originally drawn on  4 December 1994.
Click to enlarge the image,
to allow you to read the notes,
and to see details of the illustration.

Note the text gives the name as Genoplesium formosum.
It has since been revised by Clements and Jones
in the Australian Orchid Name Index
as Corunastylis formosa.

In order to resolve the true Identity of this plant, I decided I needed to collect a specimen, which will be forwarded to Mark Clements, at CSIRO, for verification of this ID, and to formally record the location of these plants at Butler's Swamp, Kangaloon, NSW.
So, why am I so sure that what is growing in Kangaloon
is Corunastylis formosa?
(I am no longer as sure.
But if it is not that species, what is it?
It has appeared early in the season,
in the same location for the last 3 years).
The first point I wish to address is the habitat in which this plant grows.
My flowers are growing on the edge of Butler's Swamp, Kangaloon
They are growing in the open,
amongst grasses and some rushes
on black soil.
Some of them are found in deep moist peaty soil,
typical of an "upland swamp" over a sandstone rock substrate.
Altitude at Butler's Swamp is 640 metres.

(Legal Note: these plants at Butler's Swamp are
located immediately outside the "SCA's Special Areas")

Jones described his type specimen as
"growing amongst shrubs on or close to the edges of montane swamps;
less commonly amongst grass bordering rivulets and other small streams.
Soils are  moist brown to blackish loams.
Altitude 750 - 800 m."

He also gives the etymology of the name "formosa"
as "from the Latin, formosus, finely formed, handsome,
in reference to the striking flowers and dense inflorescence."

I wish to make the point about the similarity of habitat for Kangaloon
and the "type locality" as described by David Jones.
Altitude is high at Kangaloon (640 m),
but not quite as high as Wadbilliga or Cathcart.
But compared to many other Corunastylis,
both these groups of plants
(Jones's "Type specimens" and my plants)
must  be acknowledged as "growing at altitude".

Also the soil and habitat preferences appear similar for both sites.
Importantly, this is an unusual locality and habitat
for other Corunastylis species I have located in this region
prefer locations, on dry soils or exposed rock shelves.

And now to the flower details:

The lateral sepals look like pointed "horns" poking out.
In situ, these lateral sepals tend to be held horizontally.
The dorsal sepal has no hairs along the edge
and the Labellum is coarsely hairy.
The labellum is also quite broad and "stiff" (i.e., it is not motile***)
as distinct from Corunastylis fimbriata, for example.

To see the flower clearly, (isolated from others on the stem)
I severed the ovary and the flower from the stem.
Compare this image with the Figure "d"
in the illustration above.
(Ignore the shadow lines)
Click to see the details.

Back to the Identification of this plant.

This flower has the same "structure" as described by David Jones within his  Corunastylis Group 2: "Dorsal Sepal hairless, petals hairless or with a few long hairs labellum broad with long coarse hairs." Jones. op cit P. 179

Compare this plant with the following related plants which I have previously reported and photographed. These are all grouped together by Jones in his "Group 2" (for Corunastylis).
In order to study the flower's parts in detail
I dissected one flower.
Here is the Labellum.
You can see the coarse hairs on the labellum closely
and the two pale sections are the "callus" on the labellum
That callus is illustrated clearly in David Jones's illustration above
See figure "e" in the centre of that illustration.

Here you can see the "dorsal sepal" (between my fingers)
with the column exposed (showing the pollinia)
Click to enlarge the image.

My friend Martin Butterfield has provided a map to show the relative positions of  Cathcart, Wadbilliga and Kangaloon. 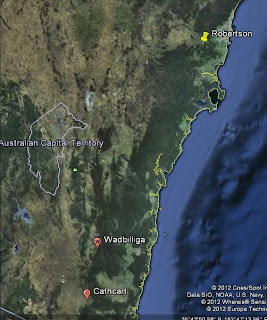 **************
Orchid chasing works best when it is done collaboratively, I find.
So I wish to thank Colin Rowan and Alan Stephenson for discussing the ins and outs of this ID with me, and Alan for providing the text from the Orchadian in which David Jones first described this species. That Journal is not available "on line" unfortunately. Martin Butterfield, who like me, is a plant chaser, and a fellow Blogger, and someone else who lives "in the bush" and so is familiar with the need to help people know where exactly we are talking about, has sent me a map with the three locations for this plant marked.
Thanks everybody.

*** motile: actively moving; self-propelled. (PlantNET)
The labellum of Corunastylis fimbriata "flutters" in the slightest breeze, or if one blows on it. This species (and many others) have a stiff labellum, which does not move.

That's an excellent discovery --- a new species for you and for the area.

The whole collaborative/sharing aspect is one of the main strengths of the internet. This post really shows how well it works!

Very well done. Sorry we can't join you for another look at the plant.

Out of interest I have used Google Earth to suss out the straight line distance between Robertson and the other locations. Using the generic locations of those metropoli as recorded by Google Earth, rather than the exact spot where Jones found the orchids, Wadbilliga is 211 km email you a screen capture of the location s in case it is of use to you.

Thanks Bronwen and Martin.
Well, we all agree about the value of collaboration.
Unfortunately, not everybody has the same attitude.
Thanks both of you for your comments.
.
Martin your map has now been incorporated, with acknowledgement.