Recently my Blogging colleague "Boobook" (whose Blog is called "Bushranger") published some photos of "Eyelash Fungi" she found on some Kangaroo dung. I mentioned in my comment upon her post on her Blog that I had seen a similar species on wet, rotten wood in the Robertson Nature Reserve (Scutellinia scutellata). I have tonight sent her a clarification that they are likely a different (but related) species from the ones I had found (previously). I was able to clarify that because of today's "find" - a new species for me. JL will understand that reference.

Today I found these tiny specimens on two neatly placed (side by side) pieces of animal dung. The scats (dung) were approximately 50 mm (2 inches) long and 30 mm (1.5 inches) long respectively. These scats were lying on Eucalypt leaves which had blown into this patch of Melaleuca forest. The leaves might be Viola hederacea. 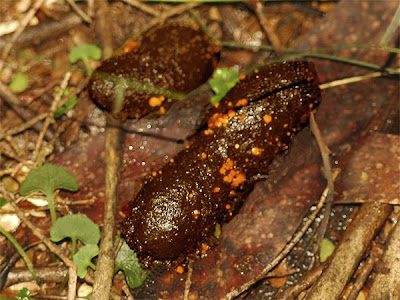 I am not an expert on "scats". Some people are. But these seem to me to be likely to be Wallaby (or Potoroo) droppings. They are definitely not from Wombats (different shape). I wondered about fox scats, but usually those are thinner and have bits of bone or fur in them. They also tend to have pointed ends (the fur content refusing to break easily). These scats were not like those Fox scats in that linked image. So, I shall settle for describing today's specimens as the dung of an unknown (small) herbivore.

It is worth mentioning that the area where I was is in a dense Melaleuca thicket, surrounded by even denser mats of intertwined Coral Fern, which is very difficult for large animals (including me) to get through. But the coral fern patches have many low track through them, and many signs of Wombats. These low tracks (almost tunnels) would suit Swamp Wallabies as well, but make access difficult for Kangaroos.

In the interest of science (and for Mick who likes things to help her assess the "scale" of small things when I show Macro photos) I took this image with the tip of my thumb visible. 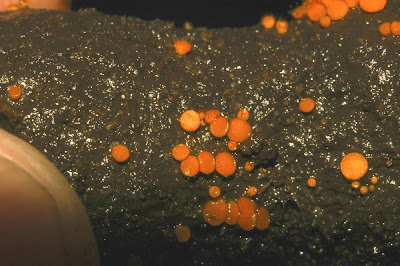 These fungi are tiny, by most standards. I know a vast number of fungi are genuinely microscopic (yeasts and such like, which are generally invisible to the human eye). But in the world of "macro-fungi" these specimens are about as small as one normally sees (or notices). Place your left thumb on the screen where my thumbnail is, and you will realise that this image is about 3 times life size. Remembering that, you will realise that today's fungi were only about 2 mm wide. The largest ones perhaps were 3 mm in diameter. 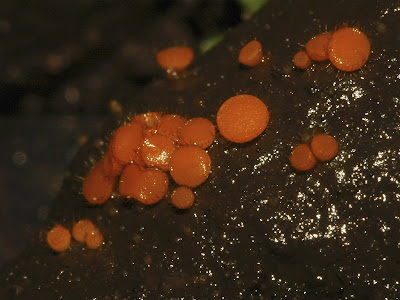 The first thing I tried to ascertain was the exact shape of these fungi. Were they little orange "balls"? No! I have previously seen minute, rounded yellowish fungi on minute stalks. (Click to see the details of the shape of these ball fungi in larger size). You will see that these fungi are different from today's flat-topped fungi. That is someone holding a 10 power hand lens to examine these minute ball fungi. These are possibly related to the Nectria species illustrated by Heino Lepp from the National Herbarium website here.

Today's Fungi turned out to be nearly flat topped. Some look slightly convex, but mostly they look concave in shape (depressed in the middle). I started to see (from the camera screen, when I "reviewed" the images in the field) that these were "Eyelash Fungi".

Once I realised that, I quickly grabbed my trusty 10 power hand lens, and confirmed that observation. I knew I had to get very close images indeed.

In the next image you can begin to see the "eyelash" feature from which they gain their common name. If you click this next image to enlarge it to its full size, you can actually see many immature Fungi just emerging from the dung pellet (on the left of the image). Already their fibrous "eyelashes" are visible. It makes me want to go back on Monday or Tuesday, to see if the whole scat has become covered in these orange fungi. 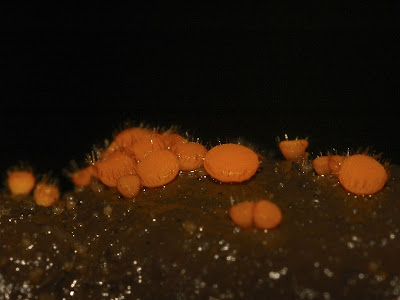 Winding out the Camera lens to near its maximum, gives me close to a 10 power magnification. My beloved Macro lens setup (a 60mm Macro lens with 1.6 Teleconverter) can go in closer, but then the flash "overshoots" the object. I need to get myself a proper high mounted flash, not the standard little "pop-up" flash on my Nikon. It is very dark in this Melaleuca thicket - nearly 80% shade, and anyway, with the Macro set-up I have, flash is generally necessary, if one wishes to see real detail on the computer screen. 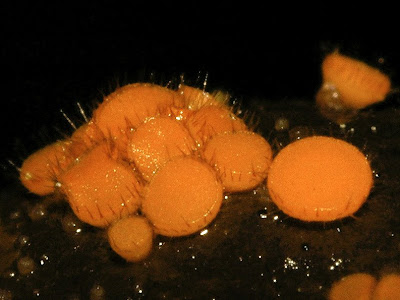 This is as close as I can get (with the flash operational). It is about 10 times magnification. The minute fibres (they look like hairs, but of course are not) around the edge of the Fungus are clearly visible at this level of magnification.

So, while today's Fungi appear much the same size as the one illustrated below, that is a factor of a different lens. That is why it is useful that the thumbnails give you some guide to real sizes.

This image below is of the previous "Eyelash Fungi" I had seen in the Robertson Nature Reserve in April 2007. This one was growing on wood, not on animal dung. This image shows another person holding a small stick with the Eyelash Fungus growing on it. My memory is that this was about 1 cm across, but in truth it is probably about 6 or 7 mm across (judging by the fingernail scale). Also it is on a different substrate (wood, not dung) as discussed already. Incidentally, that image above was taken with a standard lens, and has approximately 3 power magnification, whereas the today's closest image is a Macro shot, with about 10 power magnification. So, in conclusion that "Eyelash Fungus" on the piece of wood is about 3 times as large as my Eyelash Fungi found today, on the dung.

The fungi is fascinating and beautiful and thanks for putting in a thumb to give a good idea of the scale. Great detail in the photos - but I think I'll stick to birds for a while :-)

Hi Mick
That's - you can just relax, knowing that several of us are out there checking the Poos for tiny fungi.
By the way, it was not nasty or anything.
Cheers
Denis

From Poo to Perfume - a marvellous contrast!
The photos in "Tracks & Traces of Australian Animals" (sometimes known as "What Turd is That?") are not nearly as exciting as yours. It just shows that taking a close look at a spotty bit of poo can be very rewarding.
all the best
Barbara

Thanks Barbara.
If I ever publish a book about my blog postings, I might borrow that phrase "From Poo to Perfume".
I really like it. Thanks.
.
Glad you enjoyed the photos.
One thing about Blogging is that I don't have a publisher complaining about the cost of publishing 5 similar images at different levels of zooming.
.
I figure one needs the full set to give a perspective on how tiny these things are, and why the person out in the bush ought stop and look more closely at something one might spot out of the corner of one's eye - instead of dismissing it as insignificant.
Cheers
Denis

How absolutely fascinating, Denis, and your photography is superb!

I have seen what I presume to be similar, but have never attempted to photograph them. You have inspired me! Thank you.

Hi Gaye
Thanks.
If I inspire you to check more closely the little bits on the forest floor, that's good.
Your camera is up to taking good close-up shots, as I recall.
Cheers
Denis

this is a species of the genus Cheilymenia. The provision is possible only with a microscope. A happy new year from Germany Peter.

Bell, A (2005): An illustrated guide to coprophilous Ascomycetes of Australia

Many thanks, Peter.
I shall see what I can find out about the genus Cheilymenia.
.
For other readers, the comment is from a legitimate source - it had to be, anyway, simply from the expert content. But I wished to check, before I published it.
.
I have done a Google Search on "Peter Welt, Chemnitz, De" and found a link to a notice of the Saxon Mycologist Association (or Society).
.
Isn't the Internet amazing? Experts drop by from all over the place.
.
Many thanks, Peter.
.
Denis Wilson, Robertson, NSW, Australia.

Yes, the Internet is Great. Australia is the land that is distant from us (Germany) at the farthest, and yet so close.

Yes, i am chairman of the association "Pilzfreunde (Friends of mushroom) Chemnitz" Saxony.

I am also on the board of the Saxon mycologist. http://www.agsm-sachsen.de/

My favorite are the mushrooms of dung. I have also written articles on these fungi. Short abstract see here. http://www.dgfm-ev.de/index.php?id=zmykol_721

Unfortunately you can not perform more fungi from Australia. Some of my friends who were in Australia, have been reported. One was even in jail because he had some dried mushrooms there.
In Australia there are still many unexplored fungi.
I would like to investigate such samples, but unfortunately we got nothing from Australia.

Thanks Peter.
.
I have passed your earlier reply on to the Sydney Fungal Studies Group, and I will do the same with your new comment.
.
I do not quite understand your use of the word "perform" in the comment: "Unfortunately you can not perform more fungi from Australia."
.
I assume you mean something like "Identify" or "diagnose".
Apart from that your meanings are perfectly clear.
.
Shame about your friend - presumably arrested for possession of fungi with hallucinogenic properties. Some are on restricted drug lists, and possession is "illegal".
.
We also have strict quarantine laws.
.
Many thanks again, for your comments.
.
Best wishes.
Denis

No, those were not drugs mushrooms. I think this was Gasteromycetes (Earthstars, Puffballs and Stinkhorns). This is his passion.
I wanted to write: The export of mushrooms is no longer possible from Australia.
I translate with Google, and there it is unfortunately not perfect.
For science, this export ban is very bad, although I can understand the arguments
Your orchids pictures are otherwise very nice. Then you could be envious. In Central Europe there are very few species.

Thanks Peter for the clarification.
.
Export - yes that is a problem.
.
Import of contaminated plant material has cost us millions of $s.
Of course, in the early days, the British settlers brought all sorts of weeds and fungi with them, by accident.
These weeds now dominate our countryside.
Mostly this is an import issue.
.
By contrast, our wildlife - parrots and reptiles in particular - are subject to huge smuggling issues. Never heard of anyone wanting to export our Fungi.
I would be surprised if Universities and laboratories could not arrange permits - for legitimate studies.
.
Many thanks for the compliment on my Orchid photos.
In Australia we have many species - many unusual shapes too.
.
Best Wishes.
Denis