European Wasp loses out (for once).

I noticed a European Wasp moving slowly through the grass and leaf litter, near Lake Alexandra, Mittagong.

I got a bit excited watching this even play out in front of me. I have witnessed Spider Wasps dragging Huntsman Spiders away to the lair, where a nasty fate awaits them. So, I figured there is some kind of justice being played out here.

These Ants have long antennae, and they often walk with their "Gaster" (their last body segment) held high in the air.

Posted by Denis Wilson at 2:12 am No comments: Links to this post


Posted by Denis Wilson at 10:33 pm No comments: Links to this post

There is an album on Facebook showing the large variety of fungi I saw on the weekend.
It was wet, which the Fungi loved, but which I didn't appreciate as much as the Fungi did.
These photos are available to the public - one does not need to sign up to Facebook to view them.


I have seen small "Starfish Fungi" which resemble this one. But I was not prepared for the huge size of these things (note the hand for size comparison).

As with all Stinkhorns", the sticky "gleba" smells like "poo" - to attract flies, to carry the spores away. to start new colonies.


Several old ones had dried and shrunk. But two were more or less "fresh".


Strangely, it is apparently Australian in origin, but has spread to North America and Europe. Serves them right for the Rabbit, the Sparrow and thousands of  weedy plants.

But you have to admit it is weird - world class weird.Variously called Devil's Fingers, Octopus Stinkhorn, Helicopter Stinkhorn.http://www.kew.org/.../clathrus-archeri-devils-fingers
Posted by Denis Wilson at 8:56 am No comments: Links to this post

I have heard of Scorpions being in Robertson, but I have not seen one before.
This specimen was captured by a friend, and I asked to take its photo. It was already deceased when I was told about it.
It had walked into my friend's house, near Fountaindale Road.
It was trying to crawl under a sofa. This is reported widely as common behaviour of Scorpions in Australia.
The general advice from Australian websites is that our Scorpions inflict painful stings, but are not fatal for humans. Good news for us in Australia. It is different in other countries.

"The Australian species can inflict a painful sting that results in swelling and pain for several hours, but there have not been any confirmed deaths of people from stings from Australian scorpions. Medical advice should be sought if you are stung by a scorpion." Museum Victoria

This Scorpion appears similar in size and general form to the Victorian species (plural) known as Southern or Wood Scorpions.  Apparently there are at least six species in the genus Cercophonius.


Cercophonius squama, it is a very small species (~25mm). It tends to spend most of its life buried down under rotting logs where it consumes many small insects, incuding termites. It rarely faces predators head on (in open battle). As such is one of our least toxic scorpions.

I have never had any close contact with Scorpions previously.
When we turned it over, we were surprised to see these brush-like structures

underneath the second body section of the Scorpion.
"a pair of featherlike sensory organs known as the pectines"
Source: Wikipedia


Interactive Tutorial on Scorpion Anatomy
"The second segment has the pectines, sensory organs that are unique to scorpions.  The pectines are paired, comblike structures attached to a small plate called the basal piece; evidence suggests that the pectines function in evaluating textures of surfaces the scorpion is walking on and in detecting chemical substances (pheromones) used in sexual attraction."
Source: http://www.vaejovidae.com/Anatomy.htm

Posted by Denis Wilson at 2:21 am No comments: Links to this post

These are not as late as I first thought. I have seen them in mid-April,

But I have also seen this same species in flower in the last week in January 2011.

So, clearly they are variable in flowering time, dependent upon the seasons.

Here is a Facebook album which is accessible to all - no need to sign in for anything. 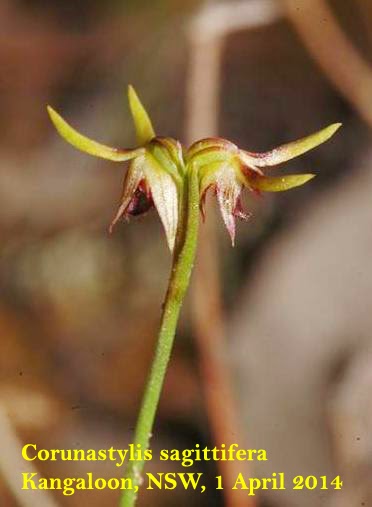 Posted by Denis Wilson at 12:44 am No comments: Links to this post