I have recorded 428mm of rain this June. That mostly fell over two days, when I took photos at Carrington Falls.

The early-flowering large-flowered Camellias, namely the non_Sasanquas, in my garden don't mind the heavy rain we have had.

Posted by Denis Wilson at 9:46 pm No comments: Links to this post

Carrington Falls - in the heavy rain.

Today my friend David Cooper accepted my request to accompany me to Carrington Falls in the rain.
I felt a bit of a "woos" (Urban dictionary - definition 1) in asking Dave to accompany me, but the path to the Falls is often wet and slippery, and the steps are a bit steep. So I felt reluctant to go there by myself. And anyway it is more fun to go there with someone else, and to swap second-hand stories about how high the river is reported to have been on other occasions, etc. Notably, that the Kangaroo River has been over the wooden bridge.

Today it was no-where near touching the bridge, but if there was a tree washed down that could easily cause the river to bubble-up and over the bridge.

My friend Rod McDonald has posted a brief video from the Bridge. Hopefully you can watch it.

Hopefully you can watch it.

This is my still image from the same spot.

Here is the full image of Carrington Falls.

Posted by Denis Wilson at 6:28 pm 2 comments: Links to this post

I was surprised on Sunday that the forecast rain had arrived, but as a mere shadow of the forecast "rain event". Bruce and Alison, from the Gosford/Wyong area called through for lunch, on their way back from Canberra. They had left Canberra in crisp sunshine, and then driven into rain the Great Dividing Range, north from Collector. But they also were surprised that the rain was not as heavy as forecast.

Well, it has now caught up with us.

Since I started to draft this, and do a few other things, I have received a further 15mm of rain.
Expect flooding in the Upper Nepean River, and the Wingecarribee River, and of course, the Macquarie Rivulet (so look out Albion Park).
Posted by Denis Wilson at 12:26 pm No comments: Links to this post

Mr Potato Head is back, with a Santa Hat.

I understand that has been organised by the folk at Fountaindale Grand Manor, to coincide with their Christmas In July events. 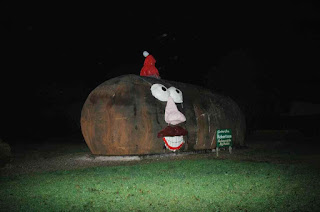 Judging by the briefness of his previous visits I thought I ought photograph him tonight, while I could.
I used a flash at night, as in the morning the sun is in the wrong side for good colour. It is all back-lit at that time, and one often gets "sun effects" on the lens.
I think this works better.

Lets see if Mr Potato Head survives this visit. I hope so.

Thanks to Martin for pointing out one link was missing. He also hopes Mr Potato head has a long and successful visit to Robertson.
Posted by Denis Wilson at 12:08 am No comments: Links to this post

I am sending this to both of you, as local members, as my concern is primarily with the Morton National Park, which is included in both the Kiama and Goulburn Electorates.

As you both know, I live in Robertson, but spend much of my time in Morton National Park, where I particularly follow my interest in photographing Native Orchids. As such I take the threat of the opening of National Parks to hunting as a personal threat to my safety.

All the assurances which are being talked about about hunting being controlled, are totally destroyed by the efforts of Mr Robert Borsak and his colleague Mr Robert Brown, of the Shooters and Fishers Party. Clearly their objective is not only to open the Parks to hunting, but more generally to spread a gun culture in Australia. If you saw the Four Corners Program "The Hunting Party" recently, you will understand exactly what I mean.
If you didn't watch that program, kindly follow this link to watch it on line.
http://www.abc.net.au/4corners/stories/2013/06/10/3776198.htm
This is important to me and to many of my colleagues to whom I am copying this note.

I endorse the comments below from Gary Schoer addressed to two local members in the Southern Sydney region.

I do not want you to bother preparing yet another "standard reply" to me about the value of the proposed "feral animal control program in National Parks". I have seen many such standard replies already, and frankly, they are meaningless drivel. (I say that as someone who was employed for many years to prepare replies to Ministerial letters. I always tried hard to address the issues raised in such letters)

I am writing about a very real threat to my personal safety, posed by untrained hunters (children even) being given access to National Parks.

Unless you can give me a genuine personal reply to my situation, just ask yourself how you could possibly expect me or my fellow naturalists and bush-walkers to ever consider voting for either of you again?

I await a considered, personal reply on what I regard as a matter of life or death.

Unfortunately I have no photos to accompany this story.

I live just 400 metres from the Robertson Nature Reserve. I know I have Brush-tailed Possums in my yard (and occasionally on my roof), but I have never seen in my yard any signs of the nests (drays) which Ring-tailed Possums build. I do recall seeing one dead (electrocuted) on a power line across the road from my house, shortly after I moved here, about 10 years ago. The drays which Ring-tailed Possums build are a common sight in the Melaleuca thickets along the Belmore Falls Road, but that is very different habitat, although only 5 kilometres away.

Tonight as I drove past the Nature Reserve, to go to a REPS meeting I saw (and had to stop to avoid) a fat Ring-tailed Possum on the road. It was quite likely a pregnant female. She was walking slowly, with body held close to the ground. She stopped, turned around and crawled back into the low growth on the Nature Reserve side of the road (whence she had come).

Later on in the evening, as I returned home I saw a healthy Fox run very quickly across the road, from private property. It leapt over the low foliage around the road verge and disappeared into the Nature Reserve. This was less than 100 metres from where I had earlier seen the little Ring-tailed Possum.

Given the relative agility of these two animals, and with the Fox's strong ability to scent out prey, I just hope that the Possum was well and truly up in the trees.

I am recording this as a "sighting record". I saw the animal from my car, but at very short range (less than 5 metres). The Possum was clearly illuminated by my car lights.
Posted by Denis Wilson at 10:58 pm No comments: Links to this post

A peaceful field, or a Small Murder of Little Ravens?

How observant are you?
There are hundreds of birds in this photo.
All heads-down eating away.
These birds were down on Kirkland Road, East Kangaloon.


Posted by Denis Wilson at 3:25 pm 3 comments: Links to this post

As soon as I saw this hairy little moth, with its hairy legs pointing forward like this, I knew I had found something "new" for me. I went in search of similar Moth images on Don Herbison-Evans's Moths site. This was the closest I could find. It eventually led me on something of taxonomic merry-go-round.


This is clearly a similar beastie -
even if its colours are a bit different from mine.
It is clearly wearing similar "socks" as my specimen (above).
Both these specimens (above and below)
also have a prominent raised patch of hairs
in the middle of the thorax.


There is clearly some confusion about the identity (or naming) of these moths.
Don Herbison-Evans refers to his specimens as (variously) as Calliteara farenoides and
Calliteara horsfieldii and even mentions a former name of Dasychira horsfieldii. He freely acknowledges these ambiguities.

I sought assistance from Len Willan, who in turn sought advice from Ted Edwards, from the CSIRO Australian National Insect Collection.
Rosslyn Beeby deserves a bouquet for the write-up of Ted's career and his AM award.

Posted by Denis Wilson at 7:09 pm No comments: Links to this post

A Corunastylis has been named after Alan Stephenson

Regular readers will be aware that I frequently go into the bush around the Southern Highlands and the Shoalhaven region, photographing Orchids, with Alan Stephenson. He is a dedicated Orchid enthusiast, and serves as Conservation Officer with the Australasian Native Orchid Society and the Australian Orchid Council.

His dedication to the cause of wild Orchids has been recognised by David Jones having named a particular Midge Orchid, endemic to the Nowra region, as Corunastylis stephensonii, The paper in which the Orchid has been described and named is published in the Australian Orchid Review, June-July 2013.
"Corunastylis stephensonii: A New Orchid Species from the Shoalhaven Region of South-eastern New South Wales" - by David L. Jones. 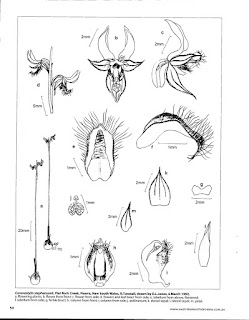 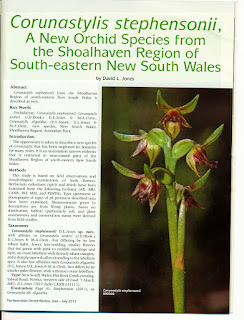 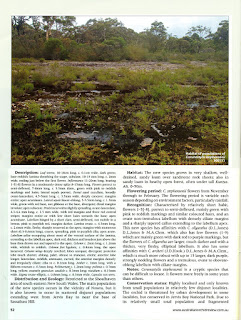 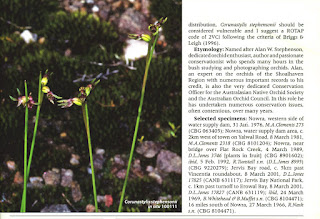 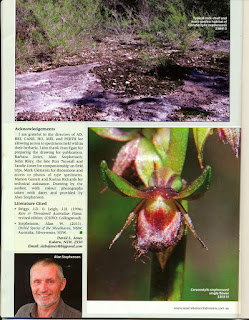 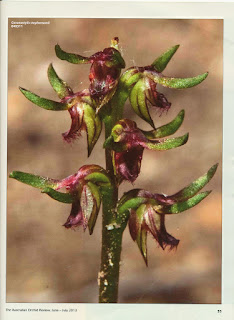 Those of us who are familiar with these plants which we have seen numerous times at Vincentia, can be relieved that now we have a proper name for these plants, rather than Corunastylis sp. aff oligantha or the unofficial "Vincentia Midge Orchid". It is now officially Corunastylis stephensonii.

Congratulations to Alan.
Posted by Denis Wilson at 4:30 pm No comments: Links to this post