I drafted this post as "Unknown Brown Grasshopper-like thing".
That very unscientific draft title tells it all, really.

I found this insect last week, and after a bit of a close-up look, I realised I had no idea what class/family it is from.

Extra long antennae.
Wings are held closely together, at a very high angle.
The insect flew quite readily, from a broom handle to the plant.
So, despite the odd angle, the wings were perfectly functional. 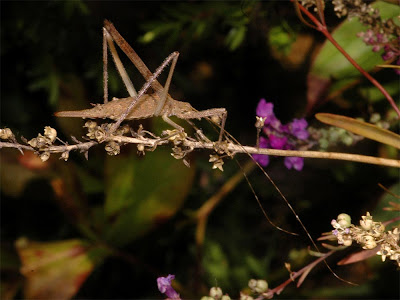 You see, any self-respecting Grasshopper, (and their cousins the Crickets) have great big mandibles for chewing stuff. Grasshoppers are primarily vegetarian, but some of our local Crickets are famously carnivorous (but that is another story). (DJW note: See my comment below) My creature has eyes on the side of its head, which is not well placed if it is a predatory insect.
Anyway, this insect has a very soft throat and gentle mandibles. Not anything like a decent Grasshopper or Cricket at all. But what is it?

Underneath view of throat and mandible.
Eye visible above.
I have searched the most obvious internet sources of information on Grasshoppers and Crickets. Few of the Grasshoppers or related Katydids have such long antennae as my specimen. I know many Crickets have long antennae, but usually large forward-facing eyes and heavy jaws.

But then there is in Western Australia a creature called a "Spider Cricket", (Oecanthus adyeri) which looks reasonably close to my creature, except for the angle at which it holds its wings.

Wings held together, centrally,
higher than the angle of the legs.
head held flat, eyes and antennae.
In this image, the head is held at a steep angle. 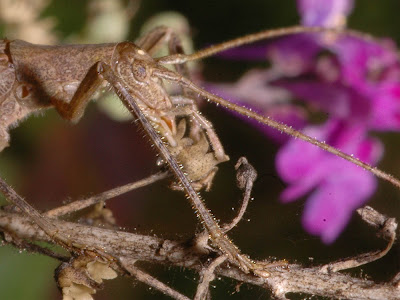 An over-head shot of the eyes and the base of the antennae.
This insect was perfectly comfortable walking down a stick
- which is what it is doing here.
Here is a low or side view of the insect. 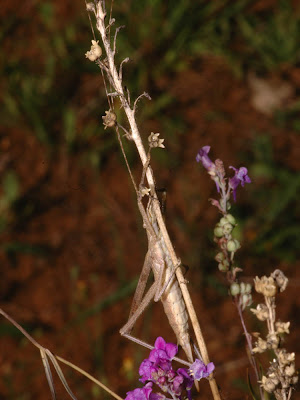 Finally, here are the wings visible
and the back of the thorax and abdomen.
the legs are also clearly visible.
If anyone can help, it would be greatly appreciated.

Well, if anyone in Australia could help, it would have to be Dave Rentz, our fellow Nature Blogger - of BunyipCo
Dave came through with the following information:
.
Hi Denis
"That’s easy. It a female of the pollen and nectar feeding katydid Zaprochilus australis (Brullé). A nice find. The "Balsam Beasts" of Densey Clyne fame are close relatives. There is a rare one down your way. Z. ninae is known only from Jervis Bay and South Durras."
.
Since Dave gave me the name of my insect, I did a Google Image search, and found that Dave had previously written a Blog post on the Pollen and Nectar Feeding Katydids, complete with a few illustrations, including a male of this species.

He describes the unusual angled wings: "The long-winged species have the wings held at a distinctive angle with the body. In addition, the outer wings (tegmina) seem to be rolled or cylindrical. This and the mottled greyish colour serves in twig mimicry."
.
He also has some fascinating history of this species, which I noticed had the name of a French scientist Brullé as the person who first "described" (named) the species: " Zaprochilus australis (Brullé) is one of the earliest described species of Australian Orthoptera. The first specimen was collected on an expedition authorised by Napoleon Bonaparte." Read more of this interesting history, and other fascinating details of these insects on Dave's Blog..
Dave Rentz is the principle author of "A monograph of the Tettigoniidae of Australia: The Tettigoniinae" - volume 1 and volume 2 (reviewed at this link). on Tettigoniidae. He is described by that reviewer as "The World's foremost authority on Tettigoniidae (Orthoptera)"

More information is found in my "comment" below, where I quote from Dave's email response to me.
Posted by Denis Wilson at 11:22 pm 5 comments: Links to this post

More about Christmas Bells around Robbo 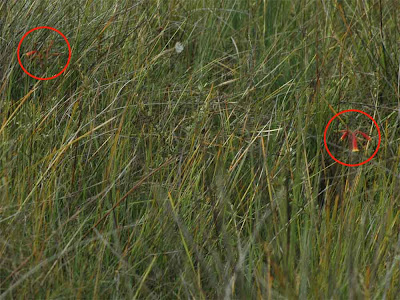 This area was crucial in the dispute with the Sydney Catchment Authority as it is rated as having the highest diodivesity rating (species per sq metre) of any area in the Kangaloon Aquifer. It is also the "Type Locality" (the place where the specimen from which a species was named) for the Kangaloon Sun Orchid (Thelymitra kangaloonica).

Interestingly, although this Swamp was studied extensively by the environmental consultants SMEC, they never recorded Christmas Bells in Butler's Swamp. That simply means they did not look at the right time, because today I spotted these plants after about 5 minutes looking, from the edge of the easement beside the swamp proper (I did not "trespass"). 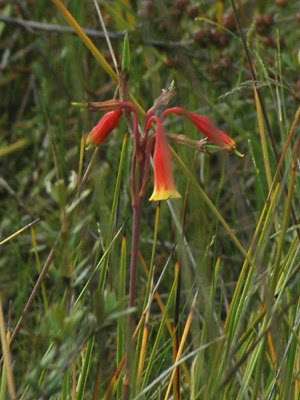 These "Environmental Studies" are always very limited, and that is why the "experts" ought seek the assistance and advice of local enthusiasts, because we can tell them when and where to look. Otherwise, trying to find a Christmas Bell, by leaf shape alone (when it is not in flower or seed) is far harder than looking for the proverbial "needle in a haystack".
This shows the location of these flowers
vis-a-vis the rest of Butler's Swamp.
See the two red circles drawn in on the image - in the foreground.
(Click to enlarge the image)
There is a monitoring bore (pipe) visible in the far distance. 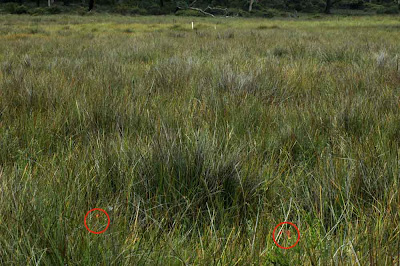 To my left, from where I took the other photos,
you can see I was close to a monitoring bore.
The SCA boundary warning notice is in the far distance.
I am parallel with that notice, just outside their boundary line. 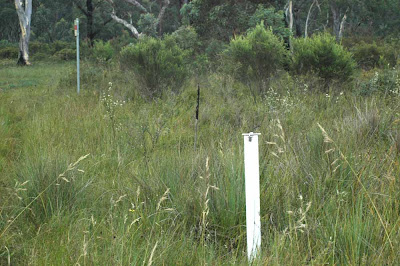 I have gone back through my old photos of Christmas Bells, and checked the dates for flowering times, in the local area. The earliest I have ever seen them in flower was 2 December 2007, on dry sandstone heath at Budderoo Plateau. Next was 1 January 2009, also on Budderoo, then in Butler's Swamp, from 21 January onwards (over several different years). The latest I have seen them flower there is 5 February 2007. Butler's Swamp is both wetter and colder than other habitats where I have seen Christmas Bells in the Southern Highlands, so that obviously delays their flowering time here.

Interestingly, in the Royal National Park (just south of Sydney, a warm spot on the coast), I have seen Christmas Bells in flower on 22 July 2009. That record (even if unusual) confirms the range of flowering times of this species, and the need for local knowledge, when trying to conduct environmental studies, to find ephemeral flowers, particularly in an environment such as an "Upland Swamp".
A rare golden form of Christmas Bell
in Butler's Swamp 25/1/2007 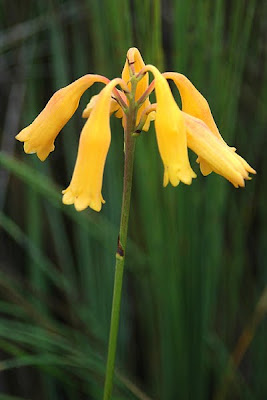 I have published this image before, but just for old times sake, here is a photo of a rare golden form of the Christmas Bell, which flowered in Butler's Swamp on 25 January 2007. It is regarded by the botanists as a variant form, within the basic species.
Posted by Denis Wilson at 10:57 pm 4 comments: Links to this post

I have entitled this posting "Seeing Robertson through New Eyes", as I have been asked to present some photographs by a young visitor to Robertson, Helena Redwood. I am happy to do this, as different people do see things differently.
Denis Wilson

"Helena is a young and talented self-taught artist with an eye for "behind the lens". She has a true artistic gift, inspiring us all with her paintings and photography.

"Stumbling into photography by pure chance at the age of fourteen she has enjoyed experimenting with scenic views from around the world. A young further developing artist we are sure to enjoy in the further future.

"Growing up in South Australia, Helena moved to the green pastures of New Zealand at the age of nine. She has lived and studied in the ice cold land of Sweden for the past two years taking her artistic venture further in photography.

"In her recent working stop-over in beautiful Robertson, Helena enjoyed venturing around, appreciating its scenic views and history.

"The rainforests made the perfect place for her landscape photos. Her quote was "I welcome you to view Robertson in a new way".
Old Vine snaking across path in Nature Reserve 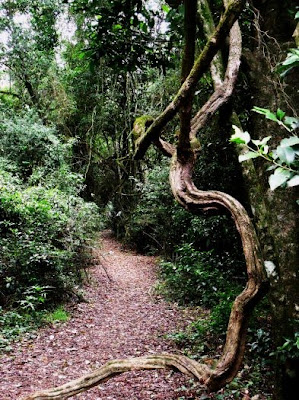 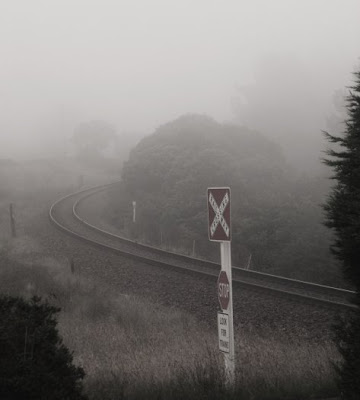 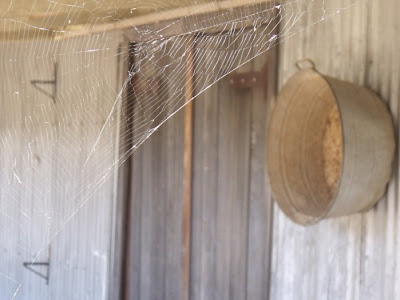 "The Long Road Downhill"
the road to the Cemetery 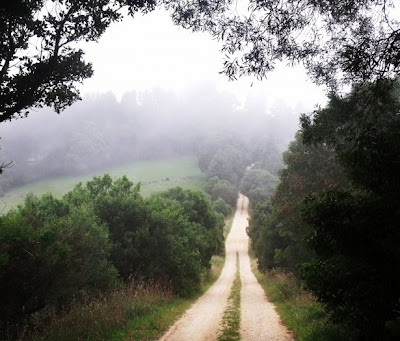 Powerlines on a Grey Day 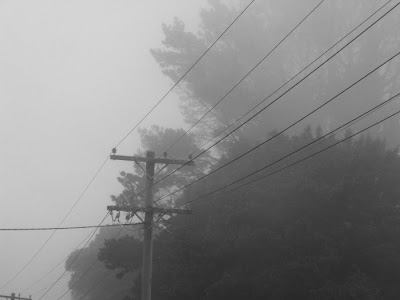 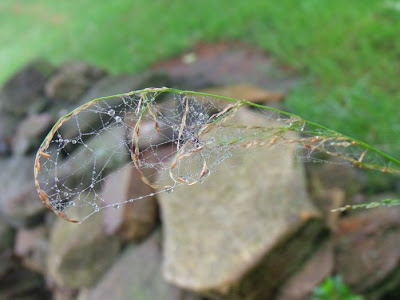 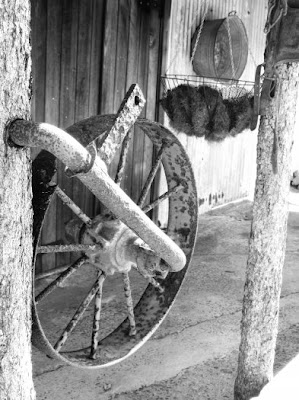 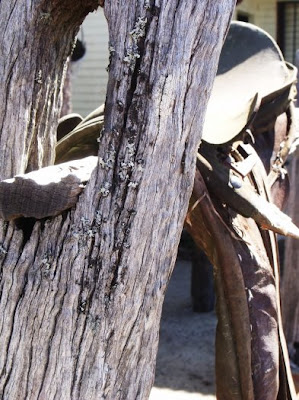 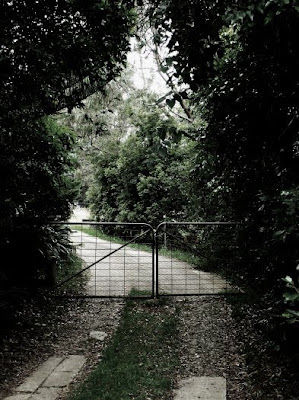 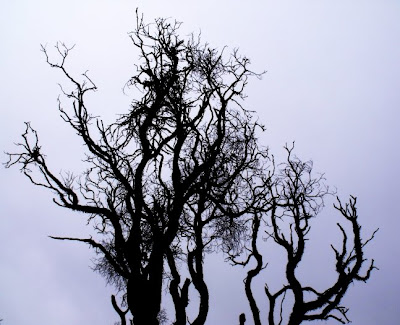 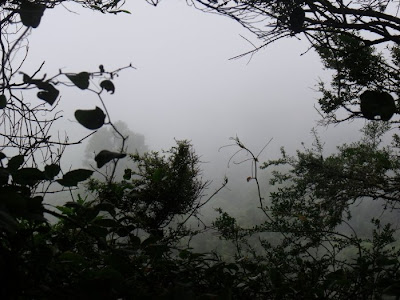 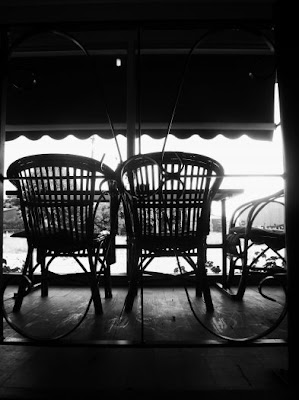 A View of Robertson Cemetery 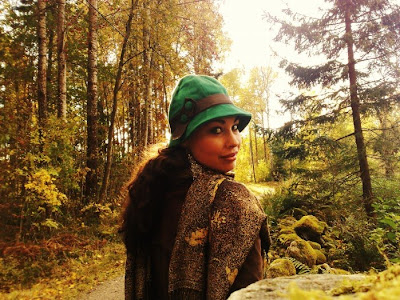 Posted by Denis Wilson at 10:19 pm 4 comments: Links to this post

Eucryphia moorei, or "Pinkwood" as it is known locally, is currently flowering in and around the village of Robertson. This plant has been adopted as the local floral emblem for several clubs and societies, as we are on the northern end of its range. Furthermore, the fact that in and around Robertson, it is growing on basalt soil here is of botanical interest, as it normally grows in moist soil, often basically a leaf-mold, over sandstone, in the wet gullies on cool, south-facing slopes of the Escarpment. So, the Eucryphias of Robertson are regarded as exceptional.

Out local Eucryphia is closely related to the "Tasmanian Leatherwood"(Eucryphia lucida), which is famous for the honey produced from it.

I know of numerous old trees which have "coppiced" - where the old original tree has died out and younger trees have grown from the roots of the original tree. As a result, these trees usually are found to be growing in a circle of trunks. This is commonly noticed in wet gullies.


There is one huge tree - the largest Eucryphia of which I know - growing as a free standing tree, with a massive trunk. It is growing on a private property at Knights Hill, on red basalt soil. It is unusual that this tree has survived a history of logging in the early days of European settlement in this district.

Rose and Carol posed underneath the tree
to provide a sense of scale of this massive tree. 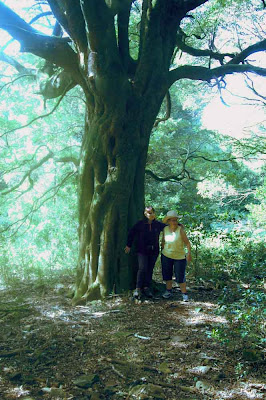 Eucryphia leaves are located "opposite" to each other, and the next leaves appear at right angles to the last pair. The flowers are located in opposite pairs, coming from the leaf axil (emerging above the leaf).

Here is an individual leaf.
If you enlarge the image, you can see it has delicate hairs,
but, by contrast, the stem is markedly hairy.
the term for this is "tomentose"
"plant hairs that are bent and matted, forming a woolly coating". 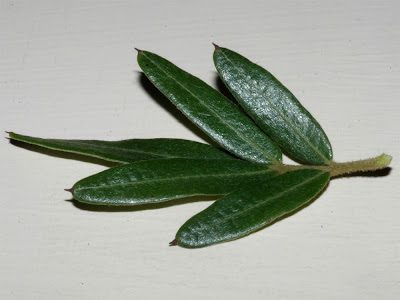 Here you can see the buds forming in a tight cluster,
on the growth tips of the stem.
The buds at left and right are a matched pair.
The inner buds, also paired, at growing at right angles to the other buds,
as befits the "opposite" structure of leaves and buds.
According to the ANBG Website, the covered buds are
the source of the name Eucryphia: