Alan Stephenson and I went out for the day, on Wednesday 31 July.We were looking for a few unusual Orchids which our records showed ought be in flower at this time of year.

As with many "Corybas" (Helmet Orchids), leaves of the Anzybas unguiculatus were found, but flowers were few and far between. Ultimately we found a few "finished" flowers, but only one which was properly open. They were in heavy leaf-litter under mixed Turpentine and Bloodwood forest.

We then drove across Deans Gap Fire Trail to a location Alan knows, under a powerline, where we found a good flowering of "Gnat Orchids". Many had tiny leaves, and they were showing only one or two flowers. But some had reasonably large leaves, with up to 3 flowers and a bud. 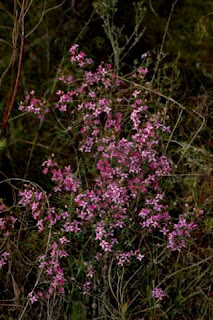 There were many Nodding Greenhoods in flower.
We found a small group of these lovely "Maroon-hoods".

Posted by Denis Wilson at 11:39 pm No comments:

After a long series of warm days, tonight we got a lovely sunset. It was followed by a mini-thunderstorm just after dark.

Sydney and Canberra are both reporting a record warm spell in July 2013. Hottest ever. Sydney had had (I believe) its hottest July ever.


Post-script:
The comments on the temperature "record" for July have been confirmed by some colleagues. Various "takes" on what it means, why politicians don't understand what it means, etc.
Most straightforward comment was: "160 year record for warmest July in White man's history".

Posted by Denis Wilson at 11:28 pm No comments:

I snapped this late last night. And I did it much to the puzzlement of Roden Mauger who was returning his truck back to his farm, presumably after taking a load of cattle to agistment somewhere. I was out on the the road, taking photos when suddenly Roden's truck came roaring along. I flashed my phone's LED light in his direction (it is only a very weak beam of light), to make sure he know I was there, and that he knew I knew he was coming (of course I did).

But a photographer on a Robertson street, on a dark night is not what a truck driver expects to find.
The Sassafras trees flower heavily some year, but not others. From tracking back, last time we had a really good flowering season for Sassafras, was in July 2009, Prior to that flowering season, the previous "good year" for Sassafras was 2006. So, they seem to flower heavily every 3 or 4 years. Presumably seasonal rainfall is a factor.

After a heavy flowering season these trees produce masses of fluffy seeds, (or hard black seeds with hairs which allow the seeds to blow on the wind). After the July 2009 flowering, the seeds were dispersed heavily in May 2010. The seeds and their fluff formed thick carpets under trees and against fence lines - like a brown snow-drift. That suits the Sassafras, as they like to germinate in the shade of tall trees, and dense shrubbery. I know that, because I have been collecting self-sown Sassafras seedlings from under my Camellia bushes this last week. Presumably these young seedlings are now in their fourth year - at about 150mm high, they're not fast to establish. I saw some other seedlings about knee-height, in a friend's garden today, and presumably they were from the 2006 seeding.

Posted by Denis Wilson at 9:23 pm No comments:

Springtime activity of the "Birdies"

I have recently posted about signs of Spring, in the plants. But yesterday and today, even though cold in temperature, have seen excitement amongst the small birds in my yard.

Superb Fairy-wrens have been dancing at my windows. At first I saw a female at my bedroom window. I suspected she gathering cobwebs as nesting material. But during the day, I heard and saw a male in eclipse plumage approaching another window, where there were no obvious spider webs, and I concluded he was doing that most masculine of things - chasing away an imaginary rival (his own reflection).
Here he was looking at me, from the Dogwood tree just a few feet away. Whenever i looked away (or put down the camera) he would dart in and fly up against his own reflection.

Posted by Denis Wilson at 8:15 pm No comments:

Spring has arrived in my garden and along the local roadsides.


Posted by Denis Wilson at 3:44 pm No comments:

Please watch out for local Wombats, in Robbo.

We all know that there are Wombats about on the roadside edges, in and around Robertson.
Some of them appear to be stubborn and stupid and their behaviour can be un-predictable.
But in some cases there is evidence that locals go out of their way to deliberately run over Wombats.


This one died opposite the Robertson Nature Reserve, close to the new Sewerage Scheme pumping station, at the eastern end of South Street. This is a 50 KpH speed zone, and very close to a nearly blind right angle corner which warrants slow speed anyway.

He was about 20 metres off the road, and from blood stains, he had been even closer to the fence, before he eventually died. But there are heavy vehicle tyre tracks beside the road (off the road). To me, it looks like someone deliberately ran him over, and then he staggered towards the fence, couldn't get through the fence, and circled back a few metres before he died. Not a quick death. And frankly, if my theory is right, this has all the hallmarks of a bastard act.

I do know that sometimes they charge across roads, and get hit - in circumstances beyond the control of drivers. But such events do not involved heavy skid marks on grass, off the side of the road. That's why I figure this is a deliberate killing, not an accident.

I am aware that many "locals" regard Wombats as vermin. That is unfortunate. If they continue to be killed on roads at the rate at which we all see dead ones, in winter and spring, then one day we will realise it it too late, and we will bemoan the loss of a once-common animal (just as has happened with their arboreal cousins, the Koalas).

Wildlife carers swear that Wombats are actually very smart and engaging creatures.
Many talk about their ability to sniff out a packet of chocolate biscuits from the back of a cupboard.
(No comments on the suitability of that as a diet, please).
But in terms of them being frisky little critters; check out this video.

Wombats are protected animals, and ought not be killed like this.
Posted by Denis Wilson at 2:06 pm 1 comment:

On the weekend before last, I went to the Australian National Insect Collection, (part of CSIRO) at Black Mountain, in Canberra.
They had invited a group of professionals and some amateurs like me, to a weekend where we could meet other Moth-ers, and exchange notes, get to know eachother, and also, of course, have access to the "Collection".
Marianne Horak and Ted Edwards and Youning Su were there from ANIC, as well as Dave Rentz, a former CSIRO entomologist, and many other experts. 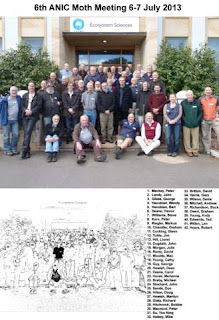 In addition to posing for a group photo, we also went to lunch at the Botanic Gardens (ANBG) Cafeteria, and I took a few "happy snaps".

Post Script: Dave Rentz also has written about the Mothing weekend, with lots of nice photos as well.
http://bunyipco.blogspot.com.au/2013/07/mothfest-2013.html

I was particularly interested in the comments about weather and Oxycanus, as I have observed a very obvious weather-related pattern in their appearances at my place - they fly on rainy nights, especially, in May and June.
So, my notes about the Swift Moths at my house appearing during rainy nights clearly fits a well-established pattern (of which I was blissfully unaware until today). Thanks again to Len Willan.

That all confirms the wonderful co-operation demonstrated amongst the "Moth-ers" of Australia, and the value of such gatherings as the ANIC Mothing weekend.

Posted by Denis Wilson at 3:46 pm No comments:

I recorded just 0.5mm of "rain" yesterday. Probably in fact the result of a heavy dew. But moisture is moisture.
But I am pleased to show the first full 60 KM view I have been able to see for the last 10 days.


Sunny days are great for plants and animals (including me and my fellows, and Lulu).  She can rejoice in sitting outside at Cafe Pirouette this morning.

Here is a distant photo of "Mountain Ducks" (Chestnut-breasted Shelducks or "Australian Shelducks". I found them on this same paddock on 1 July last year. Synchronicity? I got much better photos last year - but today they got spooked by traffic and flew to the far side of the paddock. But the bird is still recognisable (if you click on the image to enlarge it). There were two birds, a pair, but the female is hiding behind a clump of long grass. The male has its bold white neck ring clearly visible.
And now an evening view of the same distant panorama, looking over the Upper Shoalhaven valley, towards Sassafras.

Posted by Denis Wilson at 9:54 am No comments: