The first of my Peonies have a started over the last few days.

The favourite is Tree Peony "Good Lady" - which was bred in Melbourne by Dr Bernard Chow.


For people wanting to grow herbaceous Peonies, here is a quick (American) video on planting out your bare-rooted Peony plant.
http://youtu.be/13RMelR0Pg0

I fully agree with the advice to plant them (only ever) as bare-rooted plants which you ought buy in Autumn. (Americans call it "Fall"). Always buy from a recognised Peony grower.

Posted by Denis Wilson at 3:49 pm No comments: Links to this post

I owe my presence in Robertson to this Rhododendron

Magnificent Rhododendron at "Ranelagh House" (as it was).
I owe my presence in Robertson to this tree.
I remember my family visited Ranelagh House in September/October 1959 just after they moved to Canberra,
This Rhodo was in flower then, and it stuck in my mind (as an 11 year old).
All those years later, I moved to Robertson, on the basis that any place that could grow such great Rhodos was a good place for me to grow my plants too.
This one plant has influenced my life so much.
The sign now says "Fountaindale Grand Manor". 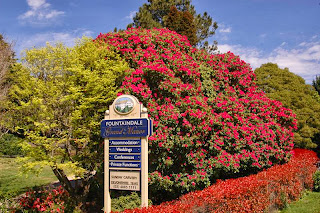 Posted by Denis Wilson at 11:56 pm No comments: Links to this post

My Orchid colleague, and friend, Alan Stephenson has told me about having found Petalochilus mentiens, "Lesser Fingers" Orchid at the very top of the Shoalhaven ridge, beyond Sassafras. Yesterday, we went to this spot, in search of those Orchids and some others,

In fact we found Pet. mentiens lower down on the Shoalhaven ridge, on Wandean Road, in an area which had been burnt out badly in autumn, by the so-called Dean's Gap Fire (which was no-where near Dean's Gap - but that's another story).

I have also seen Pet. mentiens, but in Kangaloon, near Robertson. But I looked for them last week, without success. But it is always fun searching for something one seldom finds.

We were on a slashed easement under some Power Lines, crossing Wandean Road.
The first things we saw were:

The fact that there had been a hot fire through this area seems to explain the remarkable flowering (of many species) which we saw yesterday. But that is speculation only.

Here are some photos of what we were seeing (just a few).

Posted by Denis Wilson at 11:57 pm No comments: Links to this post

This is a seedling Waratah I was given by Mr Paul Nixon, a famous selector of the Brimstone Collection series of selected varieties of NSW Waratahs. This plant was grown from wild collected seed, so it is a genuine Telopea speciosissima - not a hybrid. This is apparent from the flower shape, and the heavily serrated leaves.

These Waratahs are local to the Sandstone plateau just below Robertson, near Kangaloon, and the points further north. They are not native to the Robertson red basalt soil, however, they thrive in this soil. However, as they are local plants (to the area) and as they do so well here, Robertson is proud to feature Waratahs in public and private gardens in the village.

Not surprisingly, I can report that the wild Waratahs in the local "bush" are starting to flower - so keep an eye out, if you are down on the sandstone plateau around Carrington Falls and Kangaloon.

Please remember that these plants are wild, and are protected, so enjoy them but please do not cut them - leave them to seed and propagate themselves as Nature intends.

Posted by Denis Wilson at 7:53 pm No comments: Links to this post

These plants were identified last year, by Dr. Mark Clements, as they had a few of us puzzled. The specimens he examined were twin-flowered ones, but coming from the same group of plants, from the same area (Fitzroy Falls and Manning Lookout road). This year, I have tried harder to get close-up shots.

According to the botanical illustration, on PlantNET, these are correct for P. curtisepalus. The labellum has "teeth" on the edges of the midlobe, but lacks the teeth on the front of the side panels of the labellum (unlike P. carneus).

The labellum shape is distinct from P. carneus. P. carneus also is later to flower.

Posted by Denis Wilson at 6:41 pm No comments: Links to this post

It has actually rained in Robertson (September 2013)

I had the pleasure of accompanying two British visitors and their Australian friends for an Orchid tour of the Southern Highlands on Saturday. They were Dr. Colin Scrutton, a retired Professor from Durham University and his wife Angela. They were accompanied by two Australians, John (another geologist) and Ross, an Orchid enthusiast. Colin had contacted me months ago, via the Internet, because he had Googled "Bird Orchids" and my Blog came up.

So we were on a promise - to find Illawarra Bird Orchids.
Fortunately, it was a successful mission. In fact, the season has been beneficial for many early flowering Orchids (late Winter, and early Spring seasons). I knew there were some in flower, but in fact we found literally hundreds of plants and at least a dozen in flower. Far more than I had ever seen before (even though the weather was not particularly favourable),


As the visitors were staying on the Shoalhaven coast (could they have decided to stay further away?) I arranged to meet them at the base of Cambewarra Mountain. That way I could show them some of the other Orchids on that mountain.

My guests were very impressed with the next Orchids we looked at.

Next stop was Macquarie Pass.
I showed them the few remaining flowers where Alan and I had been the previous week, looking at remarkable colonies of Prasophyllum erecta, and Prasophyllum hildae. Even with very tired flowers, the size of these colonies was still impressive. I was able to show them some fresh flowers elsewhere on the Pass, so they could get decent photos of the hildae flowers.

And we moved on to Tourist Road, East Kangaloon to see the Pterostylis x ingens - a naturally occurring hybrid.
In between those "highlights" we saw many other species as well - far too numerous to mention here.
At this stage, we decided to call it a day.
Posted by Denis Wilson at 8:51 pm No comments: Links to this post

Dry August, but the Macquarie Pass Orchids are going gang-busters

Well, it is official, August saw Robertson (well, my house at least) got 1.5mm of rain, in two separate "rainfall events". Yep, folks, its hard to get much drier than that.
But we got a lot of rain (428mm) back in June, and so the tiny Greenhoods down on Macquarie Pass are blooming as I have never seen them bloom before.
But before we delve into the intricacies of thousands of Greenhoods, and Maroonhoods, here is a bird which brazenly walked across the roadway, in the gaps between heavy traffic rolling down the Pass. It is a native thrush, about the size of a European Blackbird, (slightly heavier, in fact).
It is a Bassian Thrush (which I once knew as a "Ground Thrush" - before the taxonomists brought Australian bird names into lock-step with the international naming conventions). 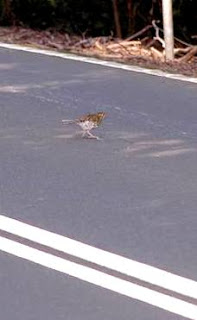 "If a Bassian Thrush is disturbed it often runs a short distance and then freezes, relying for defence on the camouflage of its mottled plumage against the leaf-litter of the forest floor."
That quote from Birds in Backyards site perfectly explains what is going on in the next shot. It scurried to the edge of the leaf litter,t hen "froze". It took me ages to even realise I had photographed the bird in the leaf litter. The yellow oval marks where it is. Look for the bird's eye.

Posted by Denis Wilson at 11:25 pm No comments: Links to this post

Another look at Shoalhaven Orchids - 31 August 2013

My friend Beth Boughton was invited to do a tour with Alan Stephenson and I, so she could see the Orchids she had heard about from me, and seen on my Blog.


Posted by Denis Wilson at 11:32 pm No comments: Links to this post