Yesterday I went into the Robertson Nature Reserve with Joan Freere, to prepare for the annual visit by the Sydney Fungal Studies Group to our Cool Temperate Rainforest. They are coming here on Saturday.

We found a few interesting specimens, including several Cordyceps, the so-called "Vegetable Caterpillars". These are fungal fruiting bodies which emerge from the ground, having consumed a large Grub of a Moth which was feeding underground, and contacted the spores of the fungus, and the fungus invaded the Grub. Here is a link to a specimen found in a previous SFSG visit, in 2008.

Another thing of interest was this Earth Star (Geastrum sp). These are related to the Puff Balls. 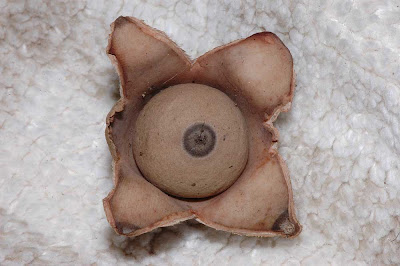 They have a thick outer casing initially which splits, and reverts, and so the tips of the casing touch the ground, lifting the central "ball" higher than its original position. See the discussion in Wikipedia. 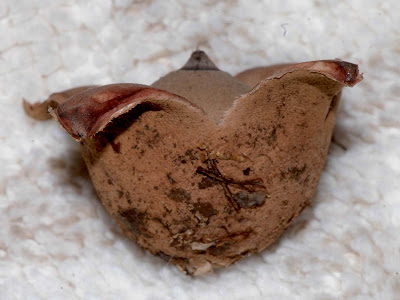 Then a pore in the top of the sphere opens, allowing spores to be puffed out, when droplets of rain fall on the thin skin of the inner sphere. 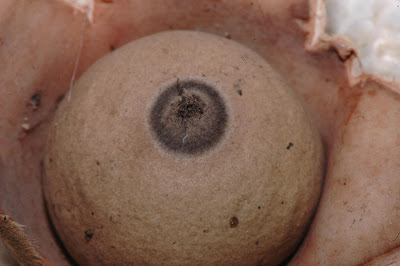 There is something appealing about the near-perfect architecture of these delightful specimens. 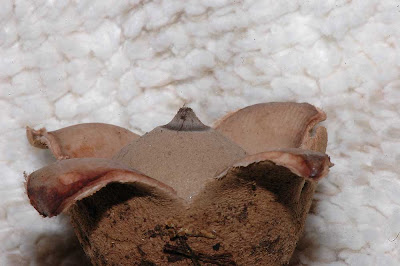 I should mention that the local Leeches found my left ankle, while I was looking at Fungi. Very painful itching, 30 hours after I found them poking their heads through my socks. I will prepare properly for the weekend visit, with insect repellant.
Posted by Denis Wilson at 8:18 pm

Very interesting fungi - but not so nice leech! They do itch - and especially when they get on the toes!

Those Cordyceps are bigger than I thought. Never spotted them here (yet).

As you say Robertson and Carwoola are tracking similar seasonal paths. I intend to revisit 'my' Earthstar each day to see if it does anything else in the way of development.

I have bookmarked the link to the Sydney Fungal studies group. It is of considerable interest with their excellent galleries.