This plant was the reason for me going with Alan Stephenson, to Granite Falls, two weeks ago, and nearly busting my foot in the process. I hobbled for two weeks as a result of the difficult terrain there. Yet I went back again once my foot had recovered (to see this plant in flower). The bonus was getting the shot of the gills of the blue Entoloma Fungus, yesterday (which shot I ought have taken previously, but didn't because my foot was so sore). The Skink with the Flying Ant was a further bonus.


For once this awful name cannot be blamed on the Polish botanist, Dariusz Szlachetko, who has a love of giving our Orchids ugly names. This one has "Benth" in brackets after its name, but I think Mr George Bentham probably called it Pterostylis daintreana (certainly not Pharochilum daintreanum).


Mr Bentham was an eminent English chap. He worked initially as an amateur botanist, but his work was so well regarded by his associates, especially Sir Joseph Hooker (the younger Hooker), that he was invited to work at Kew Gardens as a botanical researcher. Eventually he published his Flora Australiensis, in seven volumes (1863–1878). Somewhere along the line he managed to be president of the Linnean Society for 14 years, and was awarded the Royal Medal of the Royal Society.


As for the "daintreana" part, it is a little unclear to me, But I assume it is named after Mr Edwin Daintrey, an "expert amateur botanist and a founder of the Linnean Society of NSW" rather than the Mr Richard Daintree, the Government Geologist for North Queensland (and amateur botanist while in Queensland). The latter man clearly got the river named after him. But David Jones in his book refers to it as "Daintree's Greenhood". I remain sceptical, but without access to the original text of Bentham's Flora Australiensis (in 7 volumes) I cannot check that fact. You can make up your own mind which of those fine amateur botanists was the more likely nominee. If indeed it is named after Mr Richard Daintree, then there must be a spelling mistake in the original Latin Botanical description, for the "form" is wrong. Note that Mr Daintree does have an Acacia named after him, but it has the "double e" in the plant name - Acacia daintreeana (F. Muell) That's why I have gone with Mr Edwin Daintrey as the more likely person after whom this plant was named (that and the fact that it is primarily a southern NSW Plant - but it does apparently stray into Queensland).

This story is a bit like "Great Expectations" (pity poor Martin, waiting, waiting, and wading through all this historical stuff, with just a little botanical terminology thrown in to annoy him further).


Enough already. Here is the plant in question.
And a funny little thing it is too.
Clearly it is a Greenhood, and clearly related to the Bunochilus group and the Rustyhoods (Oligochaetochilus) with that high prominent "brow" on the "hood" (galea), and the very low-held ("deflexed") lateral sepals.

What I was not expecting was just how flimsy the plant is. The stem is very fine, not much thicker than a matchstick. This particular plant stands about 180mm high (approx 8 inches in the "old money").

But here at last one can see the flower structure.
Note the fine pointed "lateral sepals" (the bits underneath the "hood")
In this next image, note the dark labellum and the two large side lobes.
Those side lobes remind me
of the shape of Donald Campbell's ill-fated "Bluebird"
One can clearly see the "side lobes" of the Labellum,
when it is in the closed position. 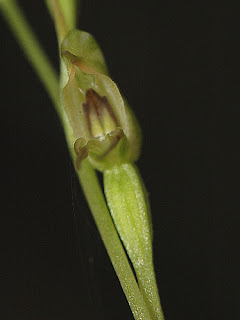 So, does this plant warrant its own generic name (separate from the rest of the Pterostylis tribe)?
Well, I think so, for it has very significant differences in flower structure, shape and growth habit from other related Greenhoods I have already mentioned, and it barely resembles other Greenhoods, like the Speculanthas, or Pterostylis acuminata, to name just two recent examples from that group.


So, despite their penchant for "clunky names" I am still a supporter of the revised names of Jones and Clements for Orchids, but most especially for their revision of the genus Pterostylis.

Peter Weston of the Royal Botanic Gardens in Sydney has this to say on the subject. (Note the arrogant use of the Royal Plural in this following quote which he has signed with his own name - not signed as part of any Editorial Committee for PlantNET):
"We  have chosen not to recognise the following genera segregated from, or resurrected from synonymy under Pterostylis by Jones & Clements (2002, Australian Orchid Research volume 4): Bunochilus, Crangonorchis, Diplodium, Eremorchis, Hymenochilus, Linguella, Oligochaetochilus, Petrorchis, Pharochilum, Plumatichilos, Ranorchis, Speculantha, Stamnorchis, Taurantha, Urochilus. Those authors justified recognition of these genera on the grounds that their phylogenetic analysis showed these taxa all to be monophyletic and that each was supported by some morphological characters. However, as these authors also noted, Pterostylis, as traditionally circumscribed, is also a monophyletic group that is strongly supported by both morphological and molecular data. The numerous name changes that they proposed for Pterostylis are simply unnecessary. (P.H. Weston March 2007)"

It is remarkably odd that Peter Weston, a recognised authority on Proteaceae is perfectly happy to go along with revisions of names (and "splitting" of species) within the Proteaceae tribe, but refuses to acknowledge the value of naming systems which separate out the blindingly obvious morphological differences in the Greenhood tribe.

This is Plant Politics at its worst.

If I say a plant is a "Pterostylis" - it could mean just about anything:
Even if one went with the other synonym of Oligochateochilus daintreanum I would still know to look for the bold "brow" on the "hood", a wide labellum, and those deflexed sepals.

But if I use the name Pharochilum - it means only type of "Greenhood" - this one.

The case for this generic name would be even clearer if there were several species within this genus. But this species cannot be held responsible for that fact. But if you were to follow this "naming" issue back to the Bunochilus group, it would be exactly the same argument, and perhaps even more easily justified.
Posted by Denis Wilson at 11:37 pm

An historical introduction is not a problem with my patience. That is like unwrapping a Christmas present! It was lack of patience over the period from Guy Fawkes night to Christmas Eve that used to earn me maternal chastisement!

In this case the wrapping is excellent of itself, if for no other reason than finally finding out the name of the Polish chap.

Your case for splitting the greenhoods is persuasive. The acts of taxonomists that irk me are when group A says "Here is the law" - perhaps 'lore' is better - to be closely followed by another lot who say "No it's this" and all is based on the probabilities of DNA sequencing. When this is followed yet another iteration back to nearly the starting point, cynics can come to the conclusion that many of the changes are actually the result of needing a thesis topic or a new publication!

Beautiful delicate flowers - and that's the only comment I am qualified to make!

Bentham's Flora Australiensis is available online in its (apparent) entirety at Biodiversity Heritage Library, though I haven't yet checked to see if I can find the entry for this particular orchid yet.

Wow, I had to check the calendar for that - 13 April to 24 December is a long time to wait.
Glad you enjoyed the unwrapping process.
Mr Szlachetko's name is a bonus for you. Good.
I agree about the "need to publish" incentive behind these publications. I think the phrase is "publish or perish".
Cheers
Denis

Thanks Dave.
Much appreciated.
It is a highly contentious issue in the Orchid world, as you can probably guess.
No doubt there are similar issues in insect taxonomy.
Cheers
Denis

Thanks Christopher
I will check out the Flora Australiensis - It is massive, isn't it. Vol 7 has some 800 pages.
I need to find its index somehow, and work from that end.
Not about to try downloading the whole lot.
Thanks for telling me where to find it.
Cheers
Denis

Thanks Mick
Yes it is a bit intimidating all this stuff. But I really am attracted to the bizarre flowers of Orchids - that's my starting point, anyway.
Cheers
Denis

I hope you will excuse this excursion down a side alley but as we are into history precision is important! It is also related to a highlight of English culture.

The date you have quoted for Guy Fawkes is the date of his birth. Unlike some other folk, Guy Fawkes Day is not celebrated on that date but when the plot was discovered (5 November).

The event used to be celebrated on that date in Australia - as Cracker Night I believe - but it was realised that it wasn't very sensible to be having bonfires and sending explosives skywards in the bushfire season and it was switched to the June long weekend.

So I only had to be patient for about 7 weeks!

Thanks Martin.
That makes more sense. I was more impressed with your "forethought" than your patience. Any child who can anticipate anything from Late April to Christmas would have been unusual.
5 November to Christmas is till impressive.
Not sure how I made the mistake of picking up the wrong date.
However, the record is now corrected.
Thanks.

Hi Martin
As we are into Historical connections, George Bentham is nephew to the famous Jeremy Bentham, philosopher, social reformer and campaigner against the death penalty. Sounds good.
Except he invented the "Panopticon" which has its echoes in the "Model Prison" at Port Arthur. A truly terrible "model" to follow.
Denis