Local residents realise that the Cherry trees along the Illawarra Highway (Hoddle Street) are a major feature of Robertson. They flower in mid-spring, each year, around about the October Long Weekend. 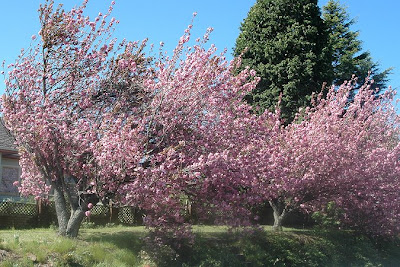 Few people realise that the man behind the selection and planting of those Cherry trees, as well as the Redwood Grove, which replaced the Pine trees of the original Robertson School Forest, opposite the Nature Reserve in Robertson was Mr. Laurence Langley. Mr Langley, who I never met, once lived in a property out at the end of Mackey's Lane, where he grew many rare and interesting trees. In fact he created a private arboretum there.

However, as far as tree planting is concerned, his greatest achievement in Robertson was the grove of Californian Redwoods (Sequoia sempervirens) which stand opposite the Robertson Nature Reserve, on the corner of Meryla Street and South Street.

Grey Goshawk perched in one of the Redwood trees 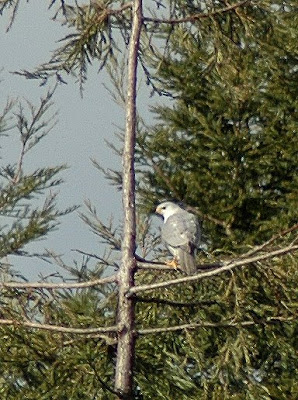 As a lover of grand trees, Mr Langley had researched these trees, and knew that they ought be suitable to Robertson high rainfall and rich, acidic red basalt soil. He imported seed from another Southern Hemisphere area, where they had been successfully established (New Zealand), and then he personally raised the plants from seed. I understand that a major working bee was held to plant these trees where there had been a plantation of Pinus radiata trees (which had originally been planted as a revenue source for the Robertson Primary School). Those trees reached maturity and then were harvested, and replaced by the Redwoods.
Some time ago, Mr Langley left Robertson, and moved to the Coast. He died there last year.

Today, the Robertson Environment Protection Society held a working bee to cut back (and paint with Glyphosate) numerous Privet bushes which were blocking the view of the old sign. 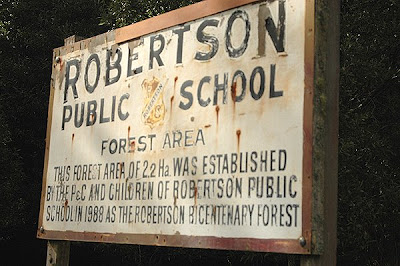 Then they erected the new sign, made by Ian Foster (shown fixing the new sign in place).It proudly proclaims the "Laurence Langley Memorial Redwood Grove", which was previously known as the "Robertson School Forest". 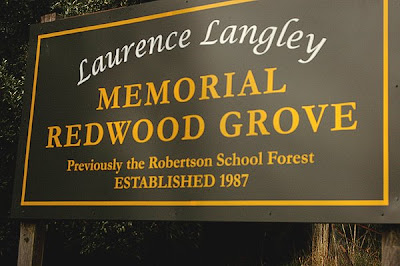 The erection of this sign coincides with the Council's recent recommendation that: "The Lawrence (sic) Langley Memorial Californian Redwood Grove, Robertson" be included on the list of properties for future heritage review. Recommendation 11 of the recommendations for the "Heritage Survey review" Pages 290, and 291. WSC Agenda 24 April 2008.

Some of the workers who put up the sign, and cleared the woody weeds to allow it to be clearly seen from the roadway.The new sign, as seen from Meryla Street, just after crossing the Railway Line. 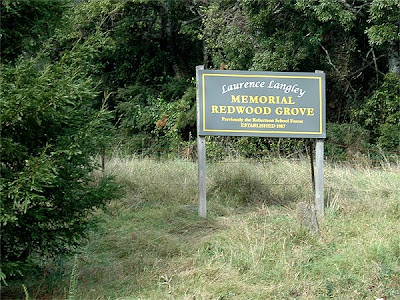 The new sign is clearly visible, now, because of the removal of many Privets and some Scottish Broom (woody weed) shrubs.
Posted by Denis Wilson at 10:50 pm