Recently I found the first flowers (for this season) of the tiny Helmet Orchid (Corybas aconitiflorus) flowering near Robertson. This was in a patch of tall wet Eucalypt forest beyond Belmore Falls. Not an area I had seen any Orchids in before. This plant was flowering just above the leaf litter, which is pretty normal for this genus. Strangely, it was a solitary flower, whereas this genus typically grows in large groups of plants. 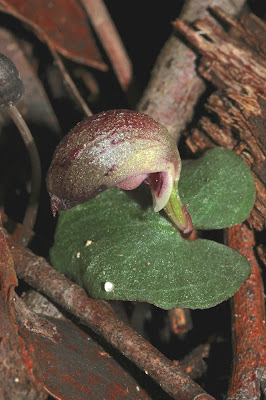 I promised you a better set of photos of the Chiloglottis trilabra on Mt Gibraltar. Here they are.
You can clearly see the "gland" or "pseudo-insect" on the labellum. This is part of the flower, mimicking in scent a wasp sitting on the flower. It attracts male wasps, which pollinate the flower, inadvertently, while trying to mate with the pseudo-insect. 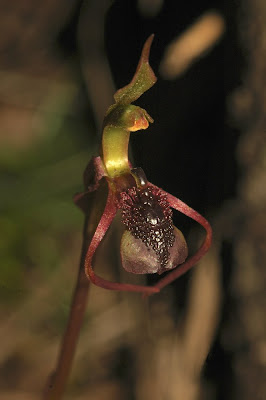 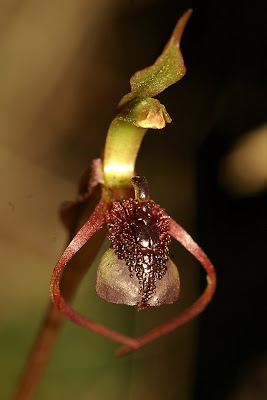 Here is the flower seen from the side, showing the labellum clearly.
Click to enlarge. 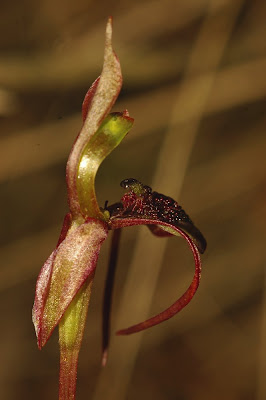 For "Mick", here is the "habitat" in which this flower grows - amongst dry grasses, under a dead wattle tree, on the side of a very rocky hill. It was very hot on The Gib in February and most of the moss beds on the exposed rock surfaces dried out very badly. Many small trees which had grown in the moss beds, died out (including this one). So, a few flat weeds survive, as well as the orchids which were dormant over summer and have re-appeared after the worst of the summer heat had passed. Click to enlarge image, to see leaves and flower of the Orchid (outlined in yellow) and other Orchid leaves to the right. 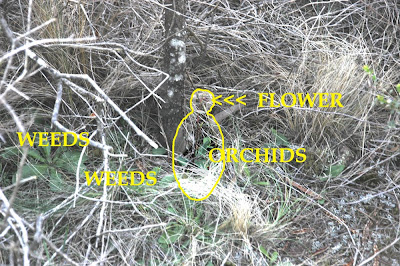 It takes some practice to find these dark flowers hiding away like this. The paired leaves of the Chiloglottis are fairly easily spotted once you know what to look for. I had, in fact, seen leaves here over a year before, and did not know exactly what they were, but I knew they would turn out to be Orchids - so it was a matter of checking this location on each visit to the Gib, until I found them in flower.
Posted by Denis Wilson at 11:50 pm

Fascinating! But I am quite sure that it takes LOTS of practice finding these tiny little flowers. Thanks for including the photo of the surrounding grasses and weeds.

Hi Mick
.
Orchid people always talk about "Getting your eye in", which means training your eye (or your brain) to recognise certain shapes on the ground, and then peering more closely.
This requires adjustment almost every time you go out, as different Orchid types have different shaped leaves, or live in different situations.
But bird watchers do similar things too, of course.
Cheers
Denis

Hi Denis!
Just saw your welcoming message on my blog and as my reply is much delayed wanted to thank you here as well, 'cause you might not see it there. It's so nice of you to offer to show me around your corner of NSW. I hope such time might come and we would be able to do a bushwalk togother!
Best regards
Nickolay

ps. This current post (as all of yours) is very interesting and informative and shows how much knowledge and experience you have in much broader areas than us - the simple birdwatchers :) Just amazing!

Hi Nickolay
.
Thanks for the response (here).
I had not seen your reply on your site.
.
I would be happy to show you around any time. I grew up as a bird watcher and junior Field Naturalist, then concentrated on birds in my teenager years, and young adulthood, and then got back into plants seriously when I moved to Robertson about 6 years ago.
.
I can be contacted easily via deniswilson23 (at) bigpond (dot) com.
Robertson is just 2 hours south of Sydney, or an easy train trip to Moss Vale, where I could pick you up for a day outing.
Cheers
Denis

Amazing photos. I completely understand why you put one of these shots in your header. When I first came to the page and saw it, my first reaction was "eee! too close!" It acivated some primal response to spiders and large insects.

But it's beyond beautiful.

Thanks Jarrett
Sorry to have triggered some primeval response.
Your comment makes much of my lonely work worthwhile!
"Beyond Beautiful" is such a nice expression.
Many thanks