Papillilabium beckleri otherwise known as the Imp Orchid, grows in the southern end of the Royal National Park. Alan Stephenson and I went in search of it several weeks ago, and while we found plants (or Alan did and I hobbled along behind), the flowers were not quite open.
Recently, I went back there with Colin and Mischa and we found a good number of these tiny plants and, happily they were fully open. When I say fully open, the "head" of the flower (the open part) in each case is about the size of a match head. I kid you not.
The structure of these flowers is that the dorsal sepal is the brightly coloured part, the labellum has two green dots, facing the front. PlantNET says: "Labellum rigidly attached to tip and margins of column foot, forming a prominent, backward-pointing spur."
In my photo, you can see the white tube in the middle of the flower. It seems from the PlantNET description that the tube is part of the labellum which leads to the "spur" which is where there is a nectary. The "spur" is the long green structure below the main part of the flower. It looks like it is a foot of the flower, but in the next image, you can see that the flower is connected to the stem from the back of the flower. The "Spur" is in fact a blind tube (behind or technically "below") the flower. This is clearly visible in the following lateral image. 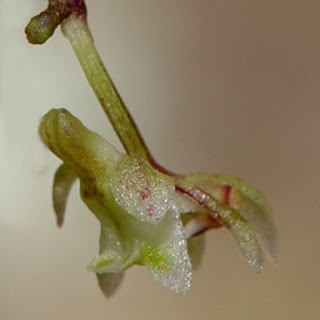 Apparently these flowers are intensely fragrant, but I could not detect it. They are minute after all, and mostly were out of range of my nose (hanging above head-height, mostly, on delicate thread-like roots which we did not want to touch for fear of damaging them).
Here is the botanical illustration from PlantNET 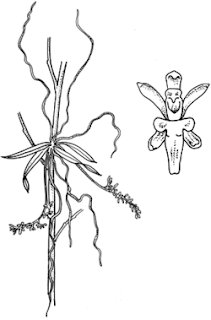 *************
This plant is on its southerly limit in the Waterfall end of the Royal, but it is apparently a common plant in south-east Queensland. You can see the Kabi ANOS page here which tells you a bit more about this species. They have an excellent close-up photo of the flower.
Here is an indication of how really small they are.
You can see some dead twigs,
and then a root of the Orchid dangling down
then there are several leaves,
and a spray of flowers hanging down.
The word "tiny" doesn't begin to cover it.
The generic description of this type of growth habit
is "Twig Epiphyte".***
Go figure.
This life-style defies all human logic.
Below, you can see Misha photographing this almost invisible plant.
*** "An epiphyte is a plant that grows upon another plant (such as a tree) non-parasitically or sometimes upon some other object, derives its moisture and nutrients from the air and rain and sometimes from debris accumulating around it". Source: Wikipedia

Locally, the only other Orchid to fit that description is the Tangle-root Orchid.
In the Shoalhaven, Sarcochilus hillii also grows in this manner.

Unlike these tiny "Twig Epiphytes", most other local Epiphytic Orchids attach themselves to reasonably sturdy branches. But even so, life as an epiphytic plant is precarious, being dependent upon the security of the branch or tree on which the epiphytic plant is growing.

But Twig Epiphytes are ridiculously fragile, by virtue of the weakness of the twig to which they are attached. In fact, the Orchid roots often end up supporting broken off twigs, complete with the leaves and flowers of the tiny Orchid, actually out living their original host twig.
Posted by Denis Wilson at 11:30 pm

Thanks Wilma
I was annoyed at having to link to a much better photo, but I imagine their photos are taken from cultivated plants, where conditions are much more able to be controlled in taking the photos.
Thanks for the kind comments, anyway.
Yes, Imp Orchid seems a funny name, till you see the flowers.
It is in the category of what my father used refer to as "one of Nature's little jokes".
that's about right, I feel.
There are some other Orchids which have far smaller flowers, though.
Cheers
Denis