Greenhoods are flowering on Macquarie Pass

There were three species of Greenhoods flowering today on Macquarie Pass. One of them, the Maroonhood, or Pterostylis pedunculata, has been subject of some discussion on my colleague Mosura's blog: "The Nature of Tasmania". I will post photos of Pterostylis curta (the Blunt Greenhood) and Pt. hildae (the Rainforest Greenhood) tomorrow.

One of the issues discussed on Mosura's blog was the shape of the Labellum. PlantNET says: "Labellum ovate, 4–7 mm long, c 3 mm wide, dark red-brown, straight, apex obtuse, tip just visible through the front of the sinus in the set position". You can see what they mean in this image, below.

Duncan was right (of course) in what he said about the notched V tip of the labellum of the Trim Greenhood. His photo of that species is visible if you click here.

Here was a bud developing - of a Greenhood which at the time I could not identify. I now know it to be a bud of Pt. pedunculata (having waited a month for it to develop) . 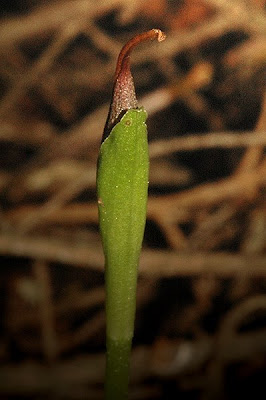 Here is an interesting (but non-typical) photo of the same bud, just half developed. The colour is clearly visible, even at that early stage. The long tip will split and open out on each side, to become the "ears" or "points". 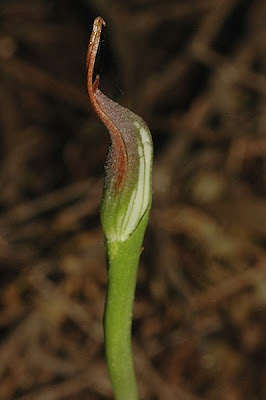 Here is the same plant, fully open, today. As a matter of interest, it is exactly a month since I first photographed the bud at its first stage of the flower protruding through the leaf bract (on 10 August). This flower is growing in a dark Melaleuca thicket, in a damp creek-bed filled with deep leaf-litter from the Melaleuca trees. The tip of the Labellum is just visible. The yellow dot is the "pollinia" visible (in position) inside the column of the Orchid, which in Greenhoods is located far at the back of the "hood" or "Galea". The Labellum in Greenhoods is movement sensitive, and when it gets triggered, it snaps back, holding an insect in such a position that it gets the sticky pollen grains stuck to the insect. In this image, the tip of the labellum appears more pink than brown. 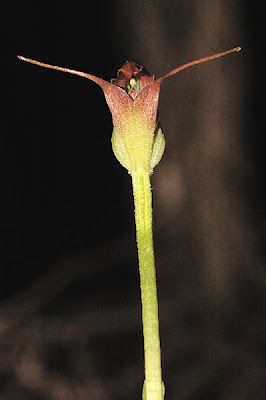 This image shows great variability in these plants. This one was in an open, sunny spot along a track half-way down Macquarie Pass (in rainforest country). This flower shows a much darker , and very glossy front of the flower. The points are held much more steeply than in the plant above. The oval-shaped tip of the Labellum of this species is clearly visible in this image. The labellum of this flower is clearly brownish, not reddish. Click on the photo to see it as a larger image. 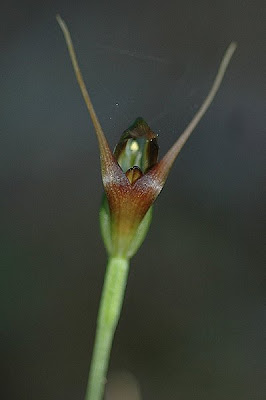 Here is an image of a pot of cultivated plants of Pt. pedunculata which happened to have been brought to the meeting of the Illawarra Branch of Australasian Native Orchid Society tonight. These plants, growing together, are probably all clones from a single bulb - which probably explains their consistent form. 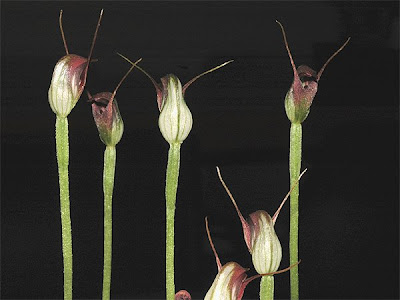 Here is a rear view of the first plant. I has a very prominet bulbous base (at the rear). This plant is close in shape to the first plant photographed by Mosura yesterday. 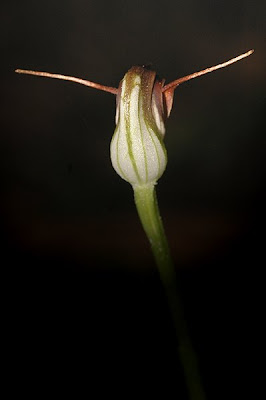 Just to confirm the variablity of these plants, here is a rear view of the second plant - the one with the very high-held points. These two plants are very different in their width of the lower part of the rear of the flower. 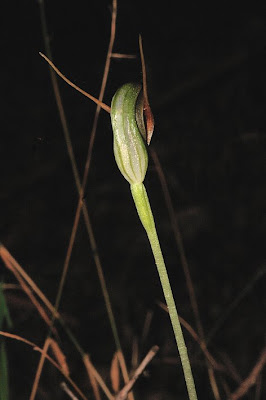 Finally, here is a young flower, just half developed. It is not as brownish as older flowers. In this case, the "points" are held high. The base of the flower is relatively narrow - not bulbous. This flower is very close to the one published by Mosura yesterday, as his "Pterostylis species B". 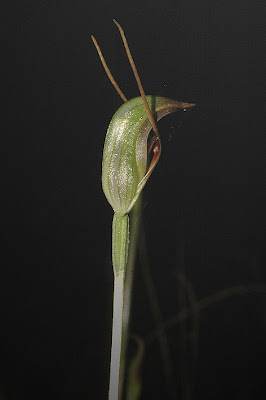 The bottom of the stem appears white, but that might be an effect of the flash used to take these photos. I did not notice that when out in the field today - so I cannot be sure.
Posted by Denis Wilson at 11:32 pm

General appearance, the shape of he labellum, and flowering time all seem to suggest so.

Yes another another nail in the coffin for my original suggestion of Trim Greenhood is flowering time. I downloaded a very handy PDF on Flowering Times of Tasmanian Orchids. Trims would be right at the end of their local flowering but the ones I was seeing were in profusion. Maroons however should be right at their peak which, evidently, they are.

Hi Gouldiae and Mosura
Thanks for the comments. This happens to be one of my favourite Greenhoods. Very neat plants to look at. Although the flower size if relatively small, some plants are relatively tall. Quite impressive.
<
That flowering time list should be useful to you Alan, at least for letting you know when to look for various species.
Cheers
Denis

The Maroonhood is certainly a variable species Denis, for that matter so is the Trim. We've found diminutive specimens in one location, only about 40 mm tall.
Big variation in colour of both species too. All helps to make life interesting.

Thanks Duncan.
Yes indeed - very variable creatures, and then there are the so-called hybrids, which I reckon are ones which nobody can match to a defined species. A case of "if in doubt, call it a hybrid".
Cheers
Denis

Nice greenhood shots.
That is a good walk..very interesting environs.
When I was there last year I spotted one of the largest Brown Snakes I've ever seen not far from that shot you got of the cabbage palms. The moist conditions produced by the shale soils and low fern growth makes an ideal habitat it seems.
I remember the leeches liked the conditions also ;)
Cheers,

Thanks, David
I know you have a fondness for the Clover Falls walk. It is indeed a lovely, but Leech-ful place.
<
Lots of Greenhoods at this time of year, make that worth while.
<
I did photograph a leech. In fact, at one stage, the grasses appeared to be waving at me because of all the leeches waving their heads around, sniffing for my location. Fortunately I got out unscathed.
Glad you got your comment logged on. Sometimes Blogger falls over.
Denis