Here I take a break from Waratahs and Orchids to write about another part of the Nature of Robertson - Art and Society. 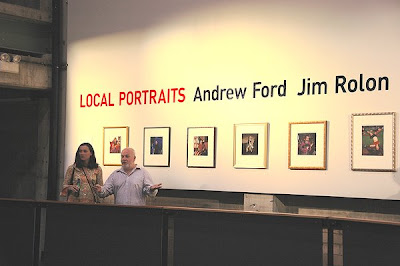 Andrew Ford (Composer, presenter of the ABC Radio National's "Music Show" and Robertson resident) and Jim Rolon (a professional photographer, and former Robertson resident) have collaborated to produce a most interesting artistic presentation - a fusion of photographic portraits, and interviews (conducted by Andy). The subjects of the photographs talk directly to us (for Andy's familiar voice is not ever heard). They talk about their own favourite piece of music. Then, the pieces are played, sometimes interspersed with additional comments by the subjects of the portraits. Anni Heino has done the sound recording and editing. 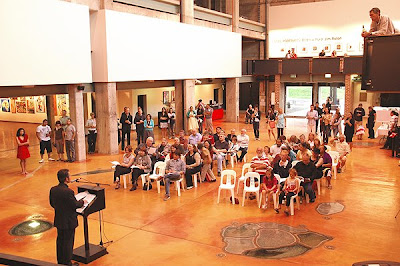 This innovative multi-media exhibition at the Casula Power Station Art Centre was opened by Kon Gouriotis OAM, Executive Director of the Centre.

The total effect of this exhibition is a delightful, if somewhat surprising revelation about why music is important to people, and indeed, what types of music they love. One person chose silence "The nicest music you can get is absolute quiet - the sort of quiet (where) you can actually hear your heart beat". The choices of music appear to me to challenge whatever sterotypes are conjured up by the appearance of the persons in the photographs.

Initially, some 35 persons were chosen in Robertson, for in 2002, both Andy and Jim were living here. Subsequently, with Jim having moved back to Sydney and the Casula Power House Art Centre having come on board as a sponsor of the proposed exhibition, an additional 35 persons from the Liverpool area (suburbs within the postcode 2168 to be precise) were selected for photographs and interviews. Naturally this doubled the scope of the project, and presumably it more than quadrupled the complexity of the project - for Andy and for Jim.

While Robertson does score a few "Slim Dusty" mentions, we also score several operatic arias, a bit of the stunningly "heavy" Shostakovich 11th Symphony and some Bob Dylan, Elvis and Roy Orbison. There is a smattering of religiously inspired music as well. Overall, a wide and eclectic selection of music, presented by people who know why they like certain choices of music.

The interviews and selections of the music have been edited together by Anni, to form a radio feature for ABC Radio National's Into the Music series. The program was broadcast this afternoon, but it will be repeated next Friday (4 October 2008, at 3pm). The full program will also be available on a special website as streaming audio for four weeks after broadcast, today.

On the same website, you'll find 20 portraits from the exhibition, complete with the interviews. Many of these are Robertson people, faces and voices you will know.

Bob was listening intently to the introductory speech. 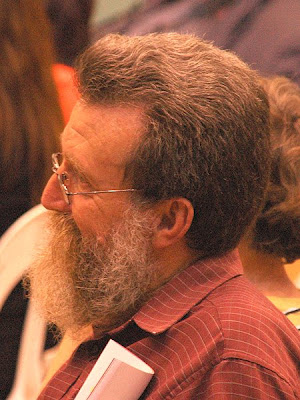 Shirley was in reflective mood as her "story" and music was played, today. 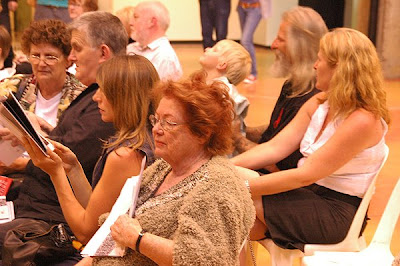 Click on the link above to go straight to these faces and listen to their brief explanation of their favourite music - "what" and "why"). You'll need a Flash player in your computer to be able to see the photos properly, and obviously loudspeakers or headphones to hear the audio.

After the formal proceedings were over, Andy and Jim were able to relax a little, with one of the members of the audience. This gentleman may have been on of the subjects of "local portraits" - but I do not know for sure. Certainly Andy and Jim seemed to know him well. 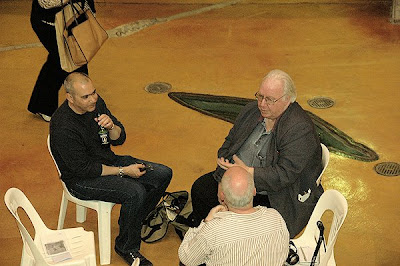 Some of the audience members today found it sufficiently interesting to share the MP3 audio players provided by the Casula Power House Arts Centre. Neil and his son, Jon, were joined at the hip by Technology and Art, today. 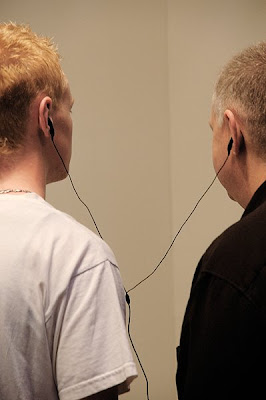 Anni and Andy might have been saying: "I suppose it was worth waiting seven years to bring this project to fruition". 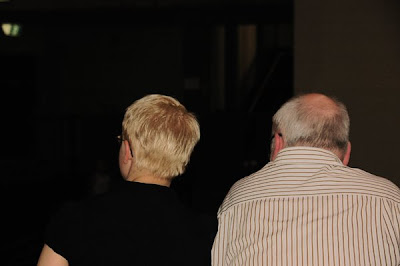 The busload of people from Robertson who went up to see the Local Portraits Exhibition to day really enjoyed themselves. Some of the "subjects" were presumably nervous beforehand. On the way back home, they were very happy and relaxed. As a group we were all excited and intrigued by what we had seen and heard and learnt about our fellows, today.
Posted by Denis Wilson at 10:41 pm

Thanks for sharing the exhibition. Nice portraits. I liked to watch them.