This is, believe it or not, an "Orchid Beetle" on an Orchid. How about that?
I had no idea what kind of Beetle it was - until I searched the Internet - and Bingo!
I just love it when insects know what they are supposed to like eating. 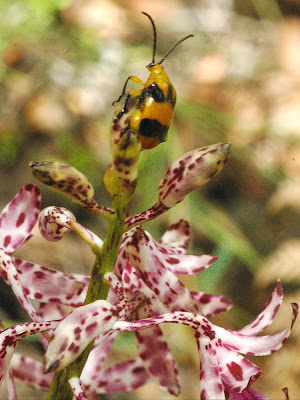 This beetle is apparently a pest of cultivated Orchids. However, way out in the bush, in its natural environment - this one is not a pest, just an insect (in the words of Irving Berlin) "doin' what comes natur'lly".
I can almost hear Ethel Merman's voice, in tiny insect form:
"Folks are dumb where I come from; they ain't had any learnin'. Still they're happy as can be, doin' what comes naturally!"
************
A week ago, I went bush with Alan Stephenson, and he showed me some of the rare Tongue Orchids found in certain areas, south from Nowra. I reported on that trip at the time.

What I did not get around to doing at the time was to show you the photos of two different species of Hyacinth Orchids - Dipodium roseum (which is common on the sandstone country of Kangaloon) and Dipodium variegatum (known for some reason as the "Slender Hyacinth Orchid", not the more obvious translation of its name). I had not seen this plant before.

Today I had a visit by Colin and Mischa, Orchid enthusiasts and friends from Victoria. They wanted to check out some of the local haunts looking for Midge Orchids which they had seen here last year, but a bit late in the season. Unfortunately for them, this trip was a bit too early for those plants. I have promised to look out for them, and to let them know when they are in flower. Anyway, we did see some plants of the Little Tongue Orchid (Cryptostylis leptochila) and the Rosy Hyacinth Orchid, growing right beside the roads in Kangaloon.

Then we enjoyed a pleasant lunch at Cafe Pirouette, in Robertson, before they left, heading south.....

It was a very grey day in Robertson, with a mist sitting low on the hills and ridges - visibility at my house was barely 100 metres. So I decided to head half-way down Macquarie Pass, to see if I could get below the clouds. That worked. I walked along Clover Hill Falls Road - a track which runs south from Macquarie Pass. It goes through wet Eucalypt forest, Turpentine forest, and in the gullies, true rainforest. I was looking for whatever might have been in flower (not much). However, I was surprised to see a specimen of Dipodium variegatum growing in this wet forest, in heavy shade. I was able to take some more photos of this plant, and compare them with the ones I had photographed with Alan last week. It was the only Orchid I saw on the Pass today. However, as it was the first time I had seen this species in the highlands district (well half-way up the escarpment anyway), I was quite satisfied.

Dipodium roseum (Rosy Hyacinth Orchid)
Labellum of Dipodium roseum.
Note the pale (silvery) pink hairs on the Labellum
Dipodium variegatum
Labellum of Dipodium variegatum
Note the dark mauve hairs on the labellum
The flower stalk and ovary (the bit below the flower) is white with purplish spots.
The flower stem (the spike from which the flowers emerge) is green
whereas the flower stem of D. roseum it is nearly black.
Here is today's specimen of D. variegatum from Macquarie Pass.
It is a much darker flower than the other specimen,
but on the right hand side of the image you can see that
the stem and ovary of the flower is white with red spots.
That is the handy diagnostic feature.
Here is a shot of the Labellum (side on) of the same flower as above,
showing the dark mauve hairs.

Lovely orchids Denis, I haven't seen variegatum. I was interested in your post on the fur tongue too, I missed that one for reasons you'll understand. I photographed it at Marlo, East Gippsland some years ago, got the tartan tongue there too, both rare in East Gippsland.

Hi Duncan
Colin and Mischa are on their way to Marlo today - looking for the elusive hunterianas. Obviously "people in the know" such as yourself, know where to look.
But I can assure you it does not stand out. Much better to be shown by someone who has scouted the area first.
I was delighted to have seen it and to get some good photos for the record.