Mobbed by Moths after a hot Spring Day.

Last night was the first night in ages when my front Porch Light drew in literally hundreds of moths, wasps, and even a few flying Assassin Bugs. It was a big night - the first in ages.
It followed an amazingly clear, warm spring day - which triggered the Sun Orchids to flower. I am not linking the moths with the Sun Orchids, but rather linking both natural phenomena to the unaccustomed burst of solar energy. To understand those statements, you need to remember that I live in Robertson, on top of the Illawarra Escarpment, an area subject to lots of cloudy days, and mists. The sun rises every morning (so the Weather Bureau tells us), but we often do not see it, except through a filtering veil of cloud.
Last night one particular moth, a relatively large one, surprised me, as I have never seen it before.
It fluttered around with soft wings. Its behaviour was quite unlike the Swift Moths and Hawk Moths which are the usual large moths I get here. Fortunately, it was relatively easy to get a likely ID for it. (Remember, I am a rank amateur when it comes to Moths). In this case, I am indebted to Donald Hobern's website.
It is in the Saturniidae family, generally known as "Emperor Moths".
It is the Helena Gum Moth (or the Helena Emperor Moth)  Opodiphthera helena
This moth (and its cousin the Emperor Gum Moth) are frequently reported by other Moth-ers. But in Robertson there are in fact relatively few Eucalypt trees. Our predominant trees are in fact, Sassafras, Coachwood and Blackwood Wattles. There are some Eucalyptus fastigata in the district, but not many within 500 metres of my house.
It has a soft body, covered with dense hairs. 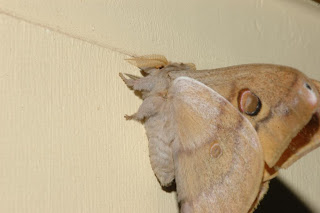 This is a back view of the abdomen 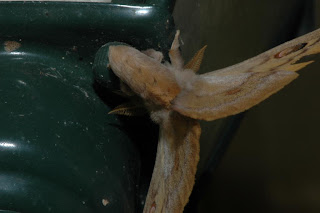 
EDIT:
In response to a comment (see below) from Dave Rentz I am posting  a link to Buck Richardson's image of the related species Syntherata janetta.  DJW.
He has a bunch of images showing the Saturniidae species he finds in Kuranda.

Others might be interested to bookmark the following link to Buck's Moth ID guide: http://www.leapfrogoz.com.au/LeapFrogOz/Moth_Identification.html
which covers the full range of moths of Kuranda.

Thanks to Dave Rentz for the comments and links to Buck's site, which take my original post to a whole new level.

Denis
By strange coincidence, last night was a big night for a related saturnid, Syntherata janetta. See Buck's moth site for all its variations. Quite extraordinary such a similar occurrence for species a couple of thousand kilometres apart.
Dave

You can see S. janetta and its many colour variants on Buck Richardson's Kuranda Mothology website

Thanks Dave
Interesting comment on the synchronicity of our sightings, given the very different climatic conditions which prevail..
I am posting the link to his images within the text as well, so more people will see it.
Thanks very much.
Denis