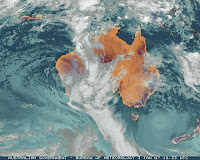 According to a report in "The Sydney Morning Herald" today:
"The remnants of tropical cyclone Isobel were lashing a wide area of Western Australia's south with heavy rain and damaging winds today."
According to the satellite photo (at left) (courtesy of the Bureau of Meteorology), the clouds appear to be centred on the Goldfields district. However, the pressure chart (below) indicates that the storm is actually further north than that.

The report in the SMH goes on: "Bureau of Meteorology senior

forecaster Noel Puzey said the system would move into the Great Australian Bight by tomorrow and would probably bring rain to fire-ravaged Victoria by the weekend."

My father always told me that the really good rains in the eastern half of the continent were usually the "wash" from a tropical cyclone coming in from the north west of the continent, and heading into the gulf country of Queensland, then continuing down into central NSW. Those storms are the key to the rivers which flood Lake Eyre and the Darling River system. Those floods are the stuff of legend - part of the great Australian myth.

If you look again at the satellite photo (top) and imagine that system having started a bit further to the east, the story is pretty much the same. The blue line indicating the "trough of low pressure" more or less marks it path across WA - so far. It is dumping large amounts of rain on the normally dry "Goldfields" region of WA and a bit further south, as I write. If the forecasters are correct, and the storm spins down over the Great Australian Bight, and then curls back into South Australia, it could indeed dump a large amount of rain into South Australia and Victoria.

Lets hope so. They need it.
Posted by Denis Wilson at 5:51 pm