I had convinced myself that this orchid must be a different species from the other ones I had recently photographed, in Canberra, Goulburn and locally, in Kangaloon. It is so much darker it has to be different - Surely? 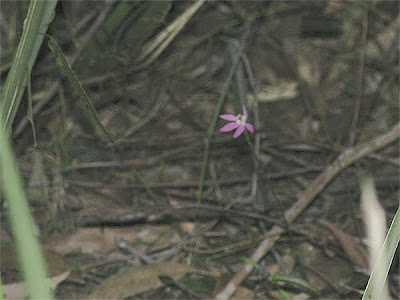 Well, actually - No.
I am talking about Petalochilus fuscatus (Caladenia fuscata).
Here are some 10 flowers on the forest floor - from mid pink, pale pink, to nearly white. (Click to enlarge). 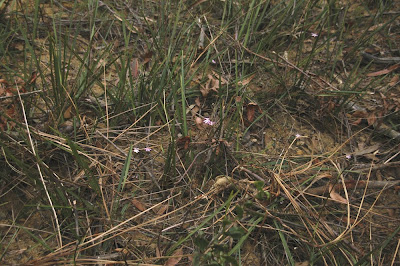 Now let me show you why it is the same species, and what makes it this species, not a Petalochilus carneus (Caladenia carnea), which is what I thought it must be. That has proven not to be the case. Instead, what I have done is inadvertently document the extreme variability of this species.
Pale and mid-pink forms growing together.

This pale form displays beautifully the incurved wings of the labellum 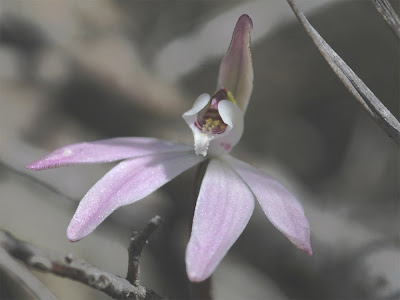 This dark form displays the yellow tips of the labellum
and the dark red stripes across the base of the labellum,
and the two rows of "calli" (glands).
The colour of this particular plant was extraordinarily vibrant, growing in a dark patch of the forest floor. In fact, the environment was so dark, I had to use flash, which has probably made the flower look slightly less vibrant than it actually was. 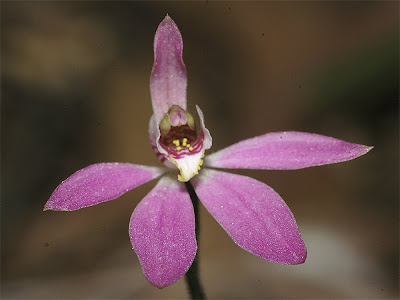 I always remember a comment by David Attenborough in which he referred to these calli on Orchids like this as "like aircraft landing lights on a runway - for insects". I like that phrase, for it perfectly describes the visual function. But of course, these "calli" are glands, and probably produce scent as well. Same purpose, though - to direct the insect where to go into the flower.
I had photographed this plant several says ago, but missed the diagnostic feature - the shape and texture of the outer side of the dorsal sepal. So I said yesterday that I needed to go back. So I went back today to find this one flower. I managed that, fortunately.
You can see the dust spots on the flower, following the dust storm yesterday. South Australian dust on a Southern Highlands Orchid. This is "actuality blogging" folks - proof of the date of this photo is in the photo itself. 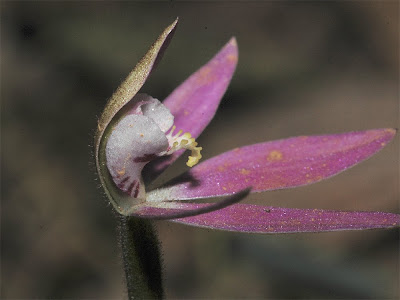 And here is the image I needed to take.
It shows the "dusky" colour on the outside of the dorsal sepal. I have had to brighten the image, to show the soft brownish colour of the back of the flower. It is the same flower as in the image directly above. Same dust spots. 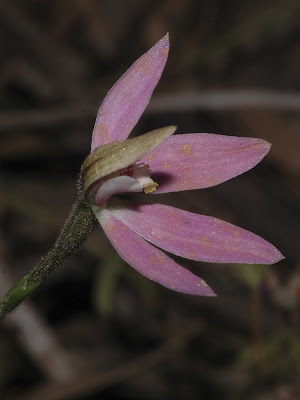 Note the sides of the labellum are incurved, to protect the centre of the flower. 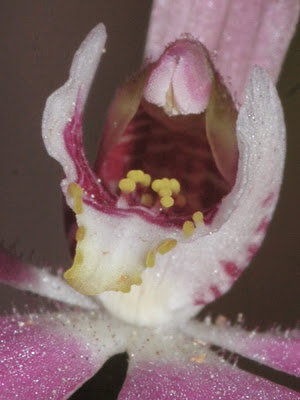 How to tell P. fuscatus from P. carneus?
The least helpful advice which the books offer in separating Petalochilus fuscatus and P. carneus is that P. fuscatus tends to flower several weeks earlier than the other species. If one finds just a few flowers, how does one know which is which?

Sure, if you keep records over years, in the same area, and if it then it falls into a pattern, then you can make an informed guess, based upon flowering times. But as I have just come back from Canberra, which is south from here, but lower, there are contradictory factors there too.

If I find lots of "pink fingers" in flower in a few weeks time, then I may be more confidsent in ascribing a name to those later flowering plants. Maybe. But for a "field guide tip" its not very helpful.
Posted by Denis Wilson at 6:01 pm

Finally here's an orchid I do know! We have Petalochilus carneus up here and I photographed it soon after I came here - although I notice I have it listed under the old name. According to my book of local native plants we also have P catenatus. As I remember there's a considerable range of color between the two.

Hi Mick
I anticipate showing the true "Pink Fingers" in several weeks. That's when I expect it will be in flower.
Meanwhile these ones are the earlier species, "Dusky fingers".
Remember to look for multiple flowers per stem, and the pink or green back of the flower, not a fuzzy brownish colour, nor dark red stripes.
They are really very close, and hard to tell apart. I know that in the past, I have thought that all tiny pink finger Orchids were Caladenia carnea. But not so.
I haven't gone back through my old photos, because they probably don't show enough detail.
You need front on, side on and rear images to tell for sure.
If you do find some, be sure to take photos and I will help you with IDs.
Cheers
Denis