My friends Toni and Les, from Moss Vale, sent me some photos several days ago of a "Starfish Fungus" (Aseroe rubra). Most of these images were taken by Toni. Some are mine. Each image is credited appropriately.
Toni photographing some of the Starfish Fungi "eggs".
DJW image (of course). 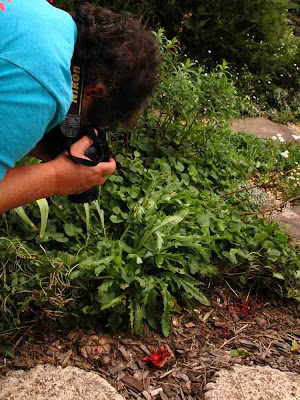 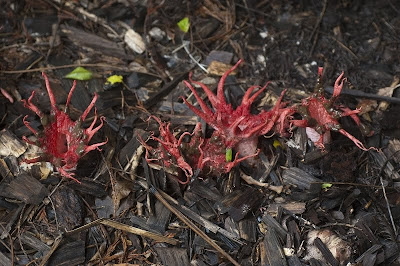 These collapsing fungi look like "calamari" -
If so, they would be "The ones John West rejected".
Image by Toni Valentine. 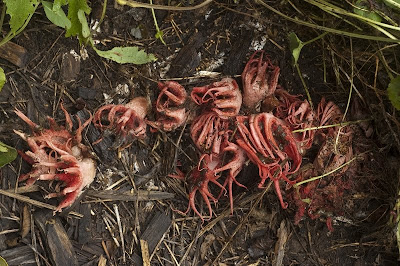 I was very keen to get some photos of my own (as I have only seen this fungus twice before). So I went over there yesterday, but the hot morning sunlight had taken its toll on these delicate structures.
Delicate, you ask?
Well, yes, in the sense that they do not last long, in their "prime".

Broken Starfish Fungus, plus "eggs"
One of the "Stomachs" is just starting to rupture.
DJW image. 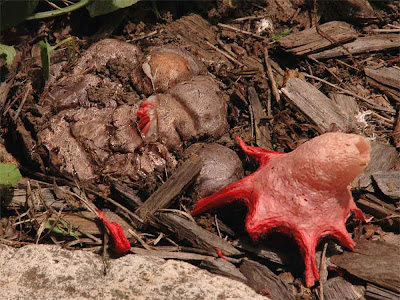 Aseroe rubra, with 3 flies.
In fact this is the broken fungus turned over again.
It is still attractive to flies. DJW image.
Starfish Fungus, with fresh "goo***" and 4 flies.
Image by Toni Valentine. 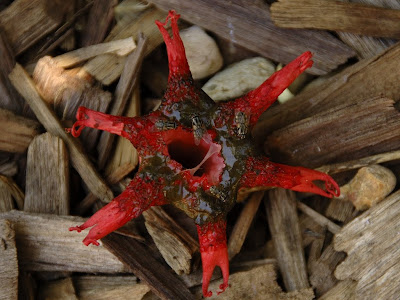 In their "prime", as this one is,
it is busy secreting the sticky goo*** which it uses to attract flies.
Image by Toni Valentine. 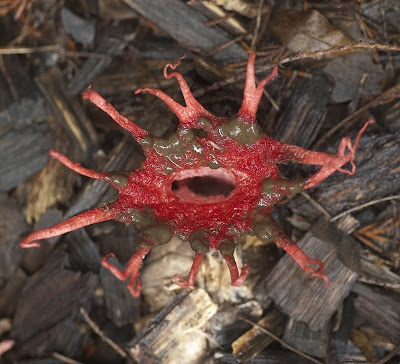 They were drying out badly.
*** The "goo" is called "Gleba", but we might as well call it sticky goo.
The "goo" serves to spread the spores of the fungus. These Fungi fall within a large group which are all known as "Stinkhorns". Hence the attraction to the flies.
A mature Fungus, plus many "eggs" developing.
Image by Toni Valentine.
These remarkable fungi are in a group known as "Stomach Fungi" (Gasteromycetes) because "these fungi produce their spores inside the fruiting body that, at least initially, is enclosed within an outer skin".
Unlike many other types of fungi, this group, including Puff Balls, need to "rupture" in order to disperse their spores. The ANBG site is careful to point out that this description "does not signify close evolutionary relationships between all the members. The name is simply one of convenience - rather than being one of classificatory importance."
Close-up of the developing "eggs" of Aseroe rubra.
These are the "stomachs" which are gelatinous egg-like sacs.
You can see the "arms" just starting to poke through the sac.
Image by DJW. 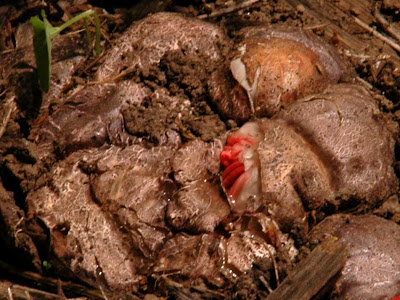 The throat of the Aseroe rubra is seen in fascinating detail here.
Fly is standing to attention.
Image by DJW 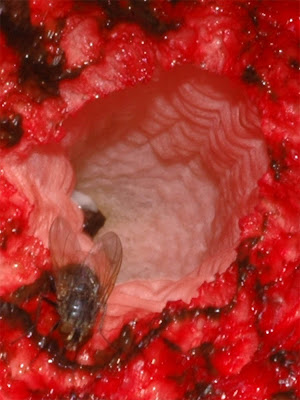 Two images I took of two of the many flies which came to these fungi. 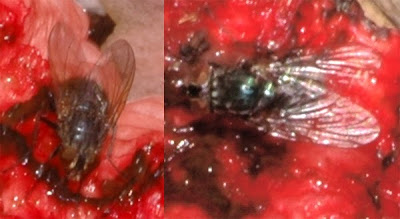 My Blogging colleague, Gaye from the Hunter has written about the Aseroe rubra fungus.
Posted by Denis Wilson at 8:21 pm

Very interesting - and it sent me back to see if I had taken photos of similar. I know I have seen some like that but apparently have not taken photos. :-( However, I have posted a photo of one I was told was a "stinkhown". I hope you will look at it and give me more details, thanks!

Ahh, delightful stinkhorns. And I say that with honesty, for I am always thrilled when I find these odd creations.

With so much rain about, and the humidity that follows here in the Hunter Valley, there should be fungi to be found here too. Since moving, I have found different fungi in my yard than what I had found at my rural residence.

Thank you for linking my Aseroe Rubra entry on my fungi blog.

Hi Mick and Gaye.
Ah, Stinkhorns always get people excited.
.
Mick, I have answered your query on your Blog. It is Dictyophora multicolor, better known as the "Bridal Veil Fungus". Nice find.
.
Gaye, always happy to give credit, as you have done lots to educate your fellow bloggers re fungi (and other matters).
Cheers
Denis

I wrote it, rain = fungi. This type does not exist for us, for another, originally Australian species, Clathrus archeri. The Squid fungus has spread widely in Europe. Beautiful, but not for sensitive noses. The spores spread, so researchers have found, but assume only a small part of the flies. Silphidae the birds eat, you can always find on Stinkhorns, the mushrooms are spread over larger areas.

Hi Peter.
You were right about "Rain = Fungi".
But we know that in Robertson. The Sydney Fungal Studies Group always comes here once a year. This year, they have scheduled it a bit later than normal - in early April. Hopefully we will get some more rain for them.
.
I did not know that Aseroe rubra is endemic to Australia - so many of our fungi have been introduced here by European settlers.
.
Interestingly, according to Wilkipedia, it was: "The first native Australian fungus to be formally described. Aseroe rubra was collected in 1800 in southern Tasmania and named by the French botanist Jacques Labillardière. The scientific name is derived from the Ancient Greek words Asē/αση 'disgust' and roē/ροη 'juice', and the Latin ruber 'red'."
.
I recently published a photo of an insect which was the first Australian Insect described, collected by Baudin.
.
Those early French explorers were very good naturalists.
.
I was careful to get my details right, on this posting, Peter, as I knew you would be reading! :-)
.
Incidentally, I have never seen Clathrus archeri. Its "gleba" seems to be distributed in dots along the "arms". Otherwise quite similar. I should ask if that one spreading overseas, makes up for the heavy spread of "weeds" (including fungi) which we suffer from here? By rights, we ought keep our own "weeds" and pests here.
.
Cheers
Denis

Nice one! Never seen them here. My backyard is a bit of a desert at the moment. Even some of the natural vegetation up the hill is drying out and dying so I'm unlikely to see much fungi for a while. Nice that I can enjoy yours though.

Hi Mosura
Good to hear from you. Are you getting Moths at present?
I have learnt this morning that it was the first Australian Fungus ever collected, by Labilladiere (of course) and from Southern Tasmania.
I have only ever seen it growing in piles of wood chips, used as mulch in gardens.
Clealry it likes to pop up after heavy rain. So I suggest you arrange that first ;-)
Cheers
Denis

Hi Denis,
no weed is the octopus mushroom with us yet. We also have a few plants and animals to fight, which displace our native species. Impatiens glandulifera, Fallopia japonica, Sciurus carolinensis, or Orconectes limosus are just some examples. In fungi, this can be difficult to say. The proliferation of new species, caused by the biology of the fungi can be observed much more difficult.

Do not be afraid if what you write about mushrooms. :-)) I just want to help you understand better.

In April, I want the way to Mallorca (island in the Mediterranean) to see me there, the beautiful nature. Since I hope to see some orchids which do not exist for us.

Did you get my mail, with pictures of the waterfall?

Hi Peter
.
I hope you enjoy your trip to Majorca.
.
I thank you for assuring me not to worry too much about my inexpert opinions on Fungi.
.
Your list of introduced pests and weeds is pretty impressive, especially the Grey Squirrel and the "Plague Crayfish". Never heard of that last one, fortunately. But we have rats, rabbits, and foxes, and wild horses and deer which have all gone feral, not to mention fish such as Trout which people are still paid by the Government to introduce. Crazy. As for weeds, we have thousands - from Blackberry ("Bramble" or Rubus) which is one of our worst problems, and all sorts of grass weeds from European pastures.
.
Yes I did get the photos of the glaciers, and the enjoyed the shot of your friend testing the water, or whatever she was doing!!!
.
I was expecting a longer waterfall, but I suppose that it is coming from the base of the glacier, not like my waterfall, dropping down into a gorge.
Thanks. I meant to reply via email, but was away for a few days, and forgot.
.
Cheers
Denis

Weird! I live in Southern California on a hill facing the ocean and these things have been showing up in my front yard. They scared me quite a bit at first because I've never seen anything like them, and frankly, I think they're quite ugly. No one around here I've showed it to has been able to identify it, until someone pointed me to this page. Must have blown across the ocean. If I can figure it out I'll post the pictures from my yard.

Hi Rachel
These Fungi are indeed reported to have spread around the world - either on live plant material or on mulch.
Wikipedia says: "From its natural habitat it appears to have travelled to other parts of the world in garden or soil products; it was recorded growing on soil transported from Australia in a glasshouse in Kew Gardens in 1829[7] and later in California in North America."
So, there you go. It has probably come with some Australian Plants, which I understand thrive in Southern California.
Glad you found my little Blog helpful.
If you do publish any photos, please let me know, so I can have a look.
Cheers
Denis

I know this may not be the right thing to say here but... I have these fungi growing in my front garden and wondering how to get rid of it. I have a small son and I am afraid he might touch or eat it. It keeps coming up in different spots under bushes, near front door etc and has been for months now.

Hi Anon.
This is a non-judgemental Blog - if you wish to remove your Fungi, I understand. Especially when it comes to choosing between children and fungi. :-))
.
Physically, you can just scratch the fungi out. The grow very shallowly. Dump them in the bin, or if you leave them out in the sun, they will dry up and shrivel very quickly. More might appear, but only for a while. Next season it is likely to recur unless you change the conditions.
.
The way to solve the problem, in the long term, is to dry the area out. Remove any mulch which might be harbouring the Fungal spores, and cut back overhanging branches which shade the area.
.
Re poisoning issues, these fungi smell like "poo", so it might be a familiar smell to your child. But I have never heard of "poisoning issues" with this fungus. The problems with some other poisonous fungi occur mostly because people mistakenly cook and eat them as if they were normal edible mushrooms. That is hardly likely to occur with these fungi.
.
Don't panic, just be sensible. It is your front yard, and you are entitled to feel safe there, regarding your son.
.
Cheers
Denis