A few kilometres south-west of the town of West Wyalong, NSW is Charcoal Tank Nature Reserve. I visited there late last year, and went back this weekend for a bird banding trip. As with last year's visit, the bird netting and banding was conducted by licenced Banders.

Many of the Ironbark Trees were in flower (although not flowering heavily). As a result, there were many Honeyeaters present in the Nature Reserve. We caught some of them.
Juvenile Brown-headed Honeyeater (Melithreptus brevirostris) 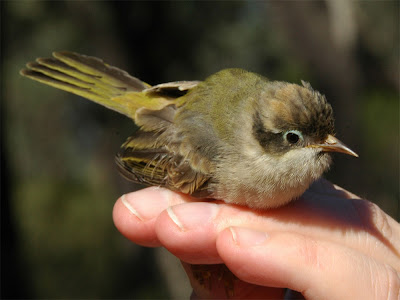 In this case we had a chance to compare the head (beak and eyes) of a juvenile and an adult.
Juvenile (pale beak, blueish eye ring), and Adult 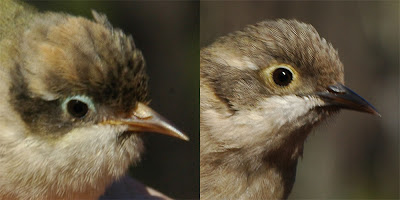 Another bird we caught in some numbers was the Grey Fantail (Rhipidura fuliginosa). You can see why this small bird is so named. 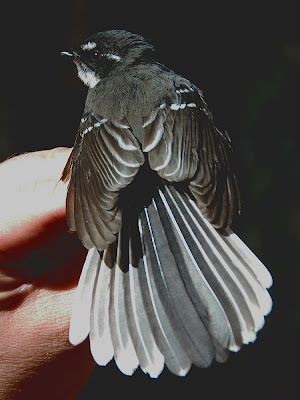 This is the Inland Thornbill (Acanthiza apicalis) It is a cousin of the Brown Thornbill. 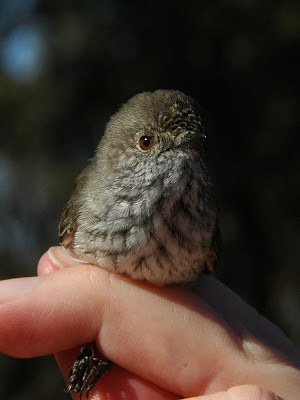 The main distinguishing features of the Inland Thornbill are its red eye (see above) (similar to the Brown Thornbill), and its bright rufous rump (with dark band, and white tips). 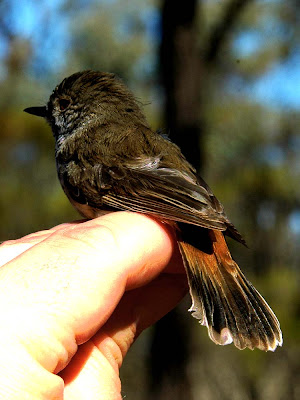 For other similar Thornbills (of inland NSW), the Chestnut-rumped Thornbill, which I have not seen in a very long time, has a pale eye and a brighter rump. It is a close relative of the Buff-rumped Thornbill, as distinct from the Brown Thornbill.

By contrast, the Yellow-rumped Thornbill (Acanthiza chrysorrhoa) has a clear yellow rump, a black forehead with white spots. It is also greener on the wings (than the Inland Thornbill). 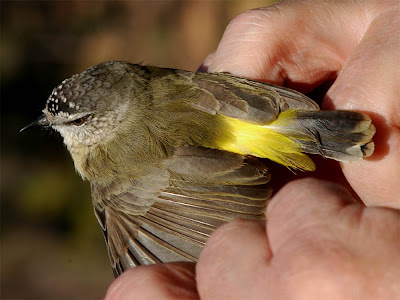 This next bird is the largest of the Honeyeaters which we caught on this trip, although Red Wattlebirds and Blue-faced Honeyeaters were present in some numbers (up in the tall trees).
Spiny-cheeked Honeyeater (Acanthagenys rufogularis) 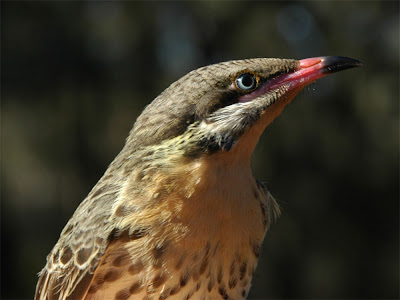 This interesting bird has clear pink soft tissues around the beak and has a blue eye. This specimen has just a trace of stiff yellow feathers in the cheek patch, indicating it has only just achieved adulthood. These birds are very vocal, with a variety of piping calls.

I have some other photos of some other birds and insects and spiders and plants, from Charcoal Tank, which I will show soon.
Posted by Denis Wilson at 9:43 pm

Great photos of all the birds and it sounds very interesting. Do you have photos of the net and the general operation etc? I have read lots of descriptions of shorebird netting (and seen photos too) but have seen very little about netting bush birds. Another posting perhaps on the general procedure etc.

Good Morning Mick
Thanks.
Yes I have a few photos which will show the nets. Not many, as it is not wise to publicise it. However, enough that you will get the idea.
Cheers
Denis

So impressed with these photo's and with what you do.
To be able to have these little delicate birds sit in your hands while you study them is pretty special!

Another good read Denis. Great pictorial comparisons of the Honeyeaters and Thornbills.

Hi BlackCrow
It is a great gift to be able to see these delicate creatures so close.
I am simply a spectator, these days, as it is all regulated, and people are required to undergo training and approval before they get their Banders Licence.
I grew up with my father as the licenced Bander. Mark Clayton and I grew up learning about banding together. He went on to work for CSIRO for many, many years. I followed different paths.
But I enjoy the opportunity to tag along, occasionally.
The least I can do is use the opportunity to show you the diagnostic features of various birds up close. There are some things one can really only see with birds "in the hand".
I am glad you are enjoying it.
Denis

Hi Mark
Thanks for the comment.
They are often hard to tell apart, but for most of us, we need to see the coastal species up close, not the inland species.
I hope to go banding in wet rainforest soon. So that might give me more familiar species.
Denis

Hi Denis,
Stunning Photography.
The Gould Society would be proud of shots such as those - crisp and full of detail.
best regards,
David

Thanks David
It is great to be able to see the birds this close.
Cheers
Denis