Swift Moths and a large grey and orange moth

This last week has seen the arrival of many Swift Moths. I say arrival, but perhaps I should say emergence, as the larval stage of these moths is spent underground. Indeed, that is how they end up getting infected with the spores of the Cordyceps fungus, which kills a number of them each season (much to the interest of the Fungi experts).
Healthy, living moths have been battering at my windows for the last few nights. Heaps of them. Big Moths, with loud flapping wings.

This one has a large silver stripe along it wings.
It is also large, at least 7cm long.
This one has both stripes and spots.
It is smaller, at about 5 cm long. 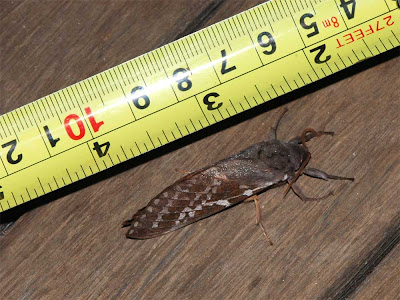 This one has a very pale wing.
My favourite of these Swift Moths is this one, with what I describe
as hieroglyphic marks on the wings.
A very handsome creature, indeed.

Donald Hobern has advised me today:
"Just checked in ANIC. Based on the specimens there, Oxycanus australis is relatively consistent in appearance (like the image I forwarded earlier), whereas O. dirempta covers the diversity of all your photos - including some exceptionally close to the most highly patterned ones you show. I would therefore say that the likely identification is O. dirempta."

I have replied to Donald Hobern, tonight:
"I am happy to follow your suggestion and go with them all being forms of Oxycanus dirempta."

I was inclined to think that surely they had to be different species, as there is such great variation between individuals, (colour, size, details of markings, etc). But then I realised that clearly they are all responding to the same environmental signals (weather, moon, moisture, plants, or whatever).

So, deferring to Ockham's Razor, it is simpler to explain THAT shared behaviour as a standard reaction of individuals of the same species, to whatever trigger is bringing them out, now.

Plus their location is "common" to all, so clearly the simplest explanation is that they are all local, and all of the same Species.

My point is simply to illustrate that Swift Moths and Cordyceps both happily inhabit the forests here. The intensity of their appearance this week confirms that there are many healthy Swift Moths here, despite the presence of the Cordyceps fungi in the local environment.

***** ***** *****
I also found and photographed a beautiful moth which I had previously seen only once, last year, at Stroud, NSW, north of Newcastle.

Once again, Donald Hobern was able to tell me what I had found.
The mauve-grey moth is Ophiusa disjungens (Noctuidae: Catocalinae) It feeds on Eucalypts, Turpentine and (interestingly) Guava. None of those plants grows in Robertson, though Eucalypts and Turpentine are not so far away.
A lovely smooth Moth, with mauve-grey colouring.
The back of its head is covered with smooth grey hairs.
Its antennae are folded under the wings in this pose.
The spectacular coloured hind wings are only exposed when the moth flies, or opens its wings.
My favourite image, shows the head, the large eyes and also the antennae, now extended, once the moth is climbing around on my fingers.
My thanks to Donald Hobern, especially for his assistance with these confusing Swift Moths. Who would have thought that one species could be so different in their markings?
Posted by Denis Wilson at 9:06 pm

Wow, great photos! Thank you so much for this post - it helped enormously with identifying a type of moth that has visiting our porch light in the evenings. Would you know what the typical lifespan of these moths is, and if the adults feed on anything?

hI Kat.
Glad to have helped.
Where I am, in Robertson, these moths appear in late autumn and in winter, especially on rainy nights.
Like Butterflies, many adults do not feed, or merely "drink nectar". They do all the main eating and growing as Caterpillars.
In this case, they live underground as "grubs" (larval stage = caterpillar, but non-hairy because they are underground). They feed on roots of wattle trees, of which the Blackwood Wattle is our dominant species.
.
They get infected by a fungus sometimes, and it can develop into a "Cordyceps" or "vegetable caterpillar". which is the fruiting body of the fungus, the size of a large finger, growing out from the mummified body of the Caterpillar stage of this moth.
If you search for Cordyceps using the search engine ("search this blog") on the top left of my own blog, it will take you to a series of images and several stories I have written about them (as fungal host).
Its all quite bizarre, but fascinating.
.
These moths have no obvious need to eat. They have done all their growing and food storing, before they pupate and convert to adult moth stage. The grubs we find mummified by the fungus are very large.
The healthy ones pupate, and the moths only last a few days I believe. I find old tired moths just sitting in the corner of the front verandah, presumably males having mated themselves to death. Females keep going a little longer to lay their eggs, then they die.
.
Cycle of life completed.
.
Cheers

Thanks so much for the helpful information about these beautiful moths. You've also helped explain the mystery of the Cordyceps fungi...I remember finding these in the bush near my childhood home in Buninyong and wondering at the similarity between the base of the fungus and an insect. No wonder!

I'm so glad to have chanced upon your blog, it's such a treasure trove of interesting posts and gorgeous images :)

Thanks Kat.
There will be some similarities between Robertson and Bunninyong. Not sure if you are still there.
.
But check out the other Victorian Nature Bloggers on my side bar. Duncan writes the famous blog Ben Cruachan, from Gippsland. Also Gouldiae's Blog, by a friend of Duncan, also in Gippsland.
Bushranger's Victorian Blog is full of very good photos and detailed information (but she goes away from time to time). And the Strathbogie Ranges - Nature View.
There are several other less-frequent bloggers from Victoria too - Boho South - Foothill Forests, Victoria; Bush Notes - Victorian foothills, And Catmint writes Diary of a Suburban Gardener.
.
But do keep on dropping by my site too, please.
Commnets help tell me what people are interested in.
.
Cheers
Denis