I have been away (to Brisbane) and then I have taken a break, to try and catch up with other writing. I have not achieved that goal, but I feel I need the discipline imposed by daily blogging. So I am getting back into it.

Today I am doing an easy blog - another story about the local Bird Orchids out on the Budderoo Plateau. Simpliglottis chlorantha, (a.k.a. Chiloglottis chlorantha), the Wollongong Bird Orchid. It is not found in Wollongong, but rather, up on the Budderoo Plateau, It is described as being located in the general "Knights Hill" area, but as Knights Hill is a basalt intrusion through the Sandstone Plateau, with rainforest habitat, even that locator is misleading. This area is adjacent to the better known Barren Grounds. As with the Barren Grounds, it is a classic Sandstone heathland habitat.
Wollongong Bird Orchid - Simpliglottis chlorantha
The red colour is underneath the "labellum" which is held nearly vertical. 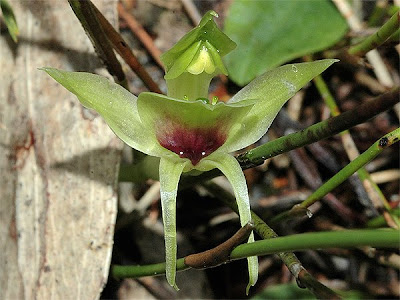 I took Alan Stephenson from ANOS Illawarra to see these plants. At least we found many flowers, with some buds still to come. Alan has a contact, a scientist from the ANU who has studied pollination of Orchids (by pseudo-copulation by certain species of wasps), and he wanted to ascertain that these plants are still flowering, before advising this chap that it is worth the trip here. Well, yes, it should be.
A perfect bud 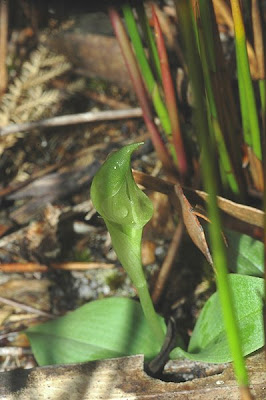 The "osmophores" (glands) on the Labellum.
The largest glands are red, and very large.
Smaller tall glands in the middle are yellowish green.
At the very front of the labellum is a series of rounded glands.
The largest one, at the front, is heart-shaped, and resembles a small blob of green jelly. 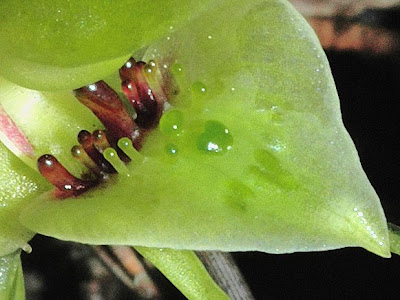 This is a photo of the very first flower I found open (this year), on 19 July 2008. You can see that the leaves have been chewed heavily, presumably by slugs or snails. In this location, one would assume that these would be native creatures. You can see that the plant closes the labellum against the "column" to protect the stigma, once the plant has been pollinated. Judging by how severely this plant has been chewed, that looks like a good survival strategy. 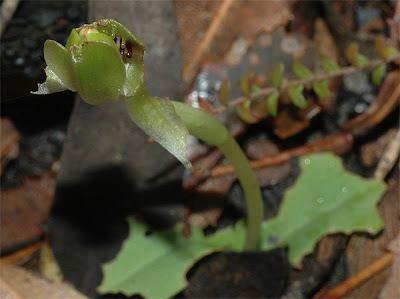 Here is the very same flower, as photographed on 19 July 2008 . You can see the distinctively bent stem (photo taken from a different angle). 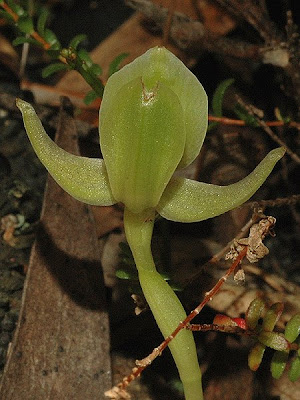 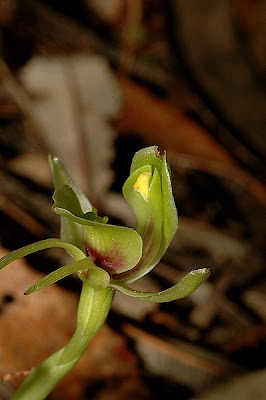 Given that there are still a number of small buds in this little colony of plants, they obviously have a long flowering season.
Posted by Denis Wilson at 9:19 pm

I went to leave a message on your Blotanical plot and realised you don't go there much, so I decided to leave a copy here too.

'This is an unashamed advert for my blog PICTURES JUST PICTURES (which tends not to get noticed because my other blog is listed first!). It's a photo a day (without words) - mainly but not exclusively of the landscape. I thought I'd let you know, hoping you like it! Lucy'

I'm glad I came over here though. I've been looking through your most recent photos and it's quite startling coming from Dorset (in England) and arriving in a completely different season!

I am completely ignorant about orchids* so I hope this isn't a silly question. Are the osmophores a type scent gland associated with luring in a hopeful wasp?

* Along with many, many other things! But I'm learning.

Interesting and informative as usual. Still not finding orchids around here. Love that 3rd photo.

Great photos again. The details you get by photographing from different angles makes it interesting even for one who knows little or nothing about orchids!

Nice photos Denis, the birds are only just starting to show buds down here.

Hi folks
Yes, Snail, the "osmophores" are glands which produce scent resembling the pheromones of female wasps - apparently. Scientists ranging from entomologists, botanists and biochemists and molecular biologists have all delved into this mystery. If you follow the link under Rod Peakall's name, you will find a very informative paper on "pseudo-copulation", complete with photos of wasps, with dobs of pollen on them.
Duncan, this Bird Orchid is said to be an early flowerer. In other respects, your timing seems to be more advanced than our Orchids here - presumably as you are lower altitude than up here on the plateau country. Down the coast, near Nowra, many of the spring Orchids are already in flower. So, altitude can make as much as two months delay in flowering time.
Mick, I usually try to photograph Orchids from side and front on, and sometimes even from the rear. usually this is to ensure the best chance of identifying them. With the nice symmetrical flowers of some Greenhoods, the two images make nice paired images.
Hi Mosura. These glands are very weird, compared even to the smaller Chiloglottis, which have a special structure called a "pseudo-insect" which actually looks like an "ant" or "wasp". This one makes no such effort to confuse the insects, and relies on scent entirely.
Thanks to everybody.
Denis