Feral Deer are a declared threat to certain classes of habitat in NSW. In fact there are six species known in NSW.

Kim had shown us some shrubby trees which has been killed by deer by stripping off the bark. We were surprised, for although we knew Kim had seen Deer on her property, we were not expecting to see trees killed by the Deer.

First we saw evidence - and then there was "proof positive"! 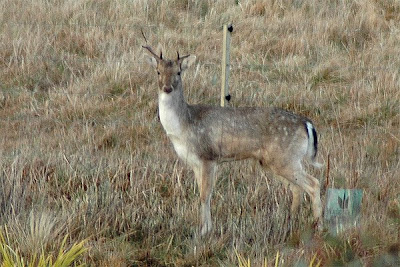 This young buck is probably a Fallow Deer, judging by the markings, the ears and the long tail, prominently used as an alarm signal. "A black dorsal stripe extends down the tail and around the area at the base of the tail but the under-tail is white and quite distinctive when raised in alarm." (Aust. Deer Association - Fallow Deer). Mature Fallow Deer "bucks" have a distinctive broad set of antlers. but this is a young animal, and is not carrying the distinctive antlers - but it does not have other characteristics of the Red Deer - which is the next most likely species. So, I call it as "probably" a Fallow Deer - but I am not an expert on deer identification. I am happy to be corrected. This youngster has lost one side of the set of antlers, so he looks lop-sided.
This young Deer, having studied us, decided to move away.
It had a stiff gait - almost a set of "springing movements". 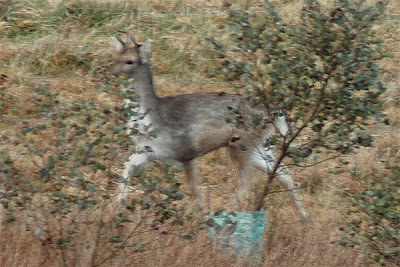 It is well reported that they like revegetation areas: " ... grazing fallow can live quite comfortably in open country, but like to have timbered cover available. They are most successful in semi-developed country, along the edge of forested areas or in regeneration areas where first-order regrowth species, such as bracken fern and wattle, are dominant."

When it got to a safe distance from us, it stopped to check us out
and then headed off to a regeneration area looking for fresh vegetation. 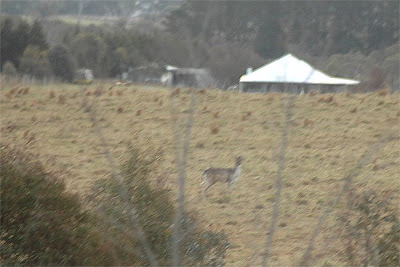 Kim and Peter have created a nice environment for these Deer. Oh dear! That was not the intention.
Posted by Denis Wilson at 7:09 pm

Beautiful animals it's just a shame people decided to dump them over here.

Definitely not a Red Deer - I've seen thousands of them in Scotland. For a start they are not spotted. I'd go along with you on Fallow Dear. They often have more prominent spots, but that will be it's winter coat where the spots can almost disappear.

G'day Denis,
Seems the Deer are a bit of a worry all round the place. I reckon I'm seeing more and more evidence of them around here than in past years.
Gouldiae

Hi Guys
Thanks for the confirmation, Mosura. I know from the photos that the large Red Deer Stags are much more massive in the chest than this fellow, - but he is young. The tail seems to be the best clue.
Gouldiae, I have seen the damage Feral Deer do in the Grampians. They are very fond of Cherry Ballart (Exocarpus) - and shave the large trees up to about 5 feet off the ground - by chewing as high as they can reach comfortably. Presumably they will kill off the young plants.