Little Eagle circling on the breeze

In the mild south-westerlies of Sunday afternoon, a Little Eagle (Hieraaetus morphnoides) came up from the forests around Belmore Falls. This happens occasionally, and I am grateful to the ever vigilant Magpie population for letting me know that an Eagle is on the wing. Their calls take on a distinctive tone and urgency, even if they are not "ganging up" on the Eagle. Then the frequency of their calls gains greatly in intensity.

It is two years and two weeks since I wrote about such a visit - it hardly seems so long. That bird appears to be a lighter form ("light morph"). Both sets of photos were taken from my back deck - same place, two years apart, with the same weather conditions (mild south-westerly winds).

The ratio of wing length to tail length is distinctive of the Little Eagle. The tail is relatively short, compared to the Whistling Eagle, and much shorter than the Wedge-tailed Eagle. The Birds in Backyards page (linked above) states that Little Eagles turning in tight circles, on straight wings, is also distinctive behaviour. Both of my reports reveal just exactly that behaviour.

Yesterday's bird is somewhat different in markings (than the previous bird) - much more clearly marked, spotted. This bird is showing a shiny spot under the wing - this is a patch where there are very few feathers, so it is a patch of skin reflecting the sun. The wings are on full extension (for full lift) and the tail is slightly fanned, as the bird is circling.In this shot, which I have marked as "perfect wing form" the wing-tips are closed, as the bird is gathering speed, turning with the wind. Tail is still fanned, for stabilisation of position. 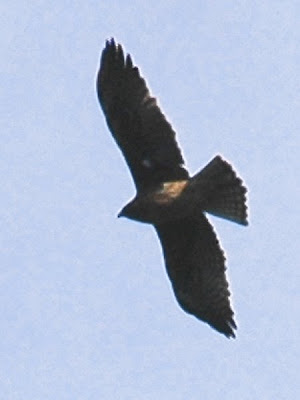 In this photo, the bird is circling back into the wind, and is nearing a stall. Wing tips are just spread, and the tail is fully spread, for maximum lift and control. 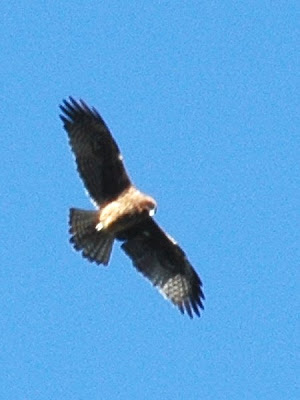 This photo shows the clearest colour underneath, as the bird turns away from the sun. This bird is clearly a "dark morph", and from the heavy body, almost certainly a female. 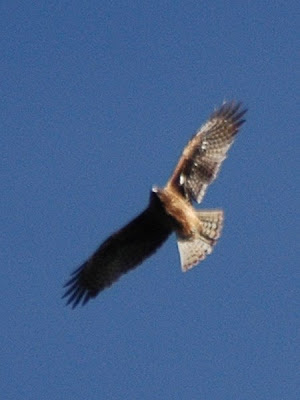 As ever, when watching these displays of flight control, I am always in awe of the way these birds can circle, gain height, turn and then reverse their "circling" direction, without flapping their wings even once.

This bird was flying high enough that the local Magpies did not feel it necessary to chase it off. So, it circled up and down the valley over a period of about 10 minutes, while I took these photos.
Posted by Denis Wilson at 11:30 pm

Nice catch from your own backyard!

We regularly get White-bellied Sea-Eagles flying over our place. Often the first I become aware of them is when our ducks all stop and tilt their heads skywards followed by a pair of forest ravens which which start mobbing.

Hi Alan
Good to hear similarities between bird behaviour in Tassie and Robertson. "Eagle on the wing" is obviously a common cause of concern. If I use Magpies to spot my Eagles and you use ducks and Ravens, it is a difference which points to similarities.
My Friend Kim looked at my blog this morning, and rang me back shortly afterwards to say she had just seen a huge Wedgie, low down, opposite her house.
Very excited she was. And she saw a juvenile Sea Eagle last week, (which was a bit unexpected).
Great stuff.
Love those might Raptors.