In the Eye of the Storm

Last evening I wrote about how a particular storm was "coming to get us"
We scored a hit, here in the Southern Highlands of NSW, and our colleagues just to the north - in the George's River catchment.


I have received 86 mm of rain overnight. 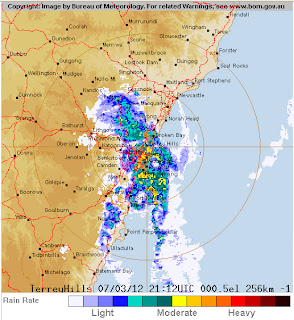 The southern edge of Sydney is on flood alert - Menangle, Liverpool, Engadine, Wolli Creek, and Audley Weir in the Royal National Park is closed (though it goes out at regular intervals). I have just heard that the Nerriga Road has water across the road, 4 Km south from the village. There are no warning signs and no police there, apparently. Jerrara Dam (water storage for Kiama - between Kiama and Jamberoo) is on "Orange Alert" - indicating a possibility of some prospect of inundation. Apparently an alert system is in place, for persons living down stream for the Dam.

I repeat the comments made previously, please do not cross any flooded roads.

There have been landslips on the Moss Vale Road (into Kangaroo Valley). A Policeman apparently was assisting with the clean up, when the road edge gave way while he was there. He was carried down the hillside some 30 metres. Radio reports said he ended up being saved by vines entangling him, and preventing him slip further. He was eventually rescued at about 3:00am, and taken to Nowra Hospital. At least he came out of it OK.

There have been rock falls on Macquarie Pass, but the road is said to be open - one may drive down the Pass with caution.


Here is the RTA "Traffic Live" web page screenshot.
If you go to the Traffic Live webpage where you may check local conditions. The blue icons will open up a box telling you the local details. Around the Upper Lachlan, and Goulburn-Mulwarree Shires, and of course, further down river at Forbes and further south at Wagga, lists of flooded roads will appear for your information.

It is a useful site to store, for future reference.

The strong winds accompanying this storm worry me more than the rain. Not that I have many huge trees on my block, but I would not like to try to take any of the main roads in and out of Robertson today. Huge trees get loosed in the wet soil, and can come down.


This is what is driving this weather. 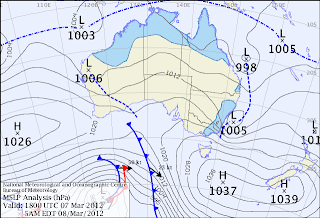 The high has move east since last night, and the low is sitting off Bega, dumping rain onto us and Sydney.

You can update your information from the Weather Bureau's Barometric Chart page
Posted by Denis Wilson at 9:12 am