Coriander (Coriandrum sativum) has a flower head which is described by the botanists as a "Compound Umbel".

While this flower structure is superficially similar to the European Elderberry I showed last week, it has significant differences when one looks into the arrangement of stems and secondary stems supporting the actual flowers. That plant had an inflorescence structure known as "Cymose corymb".

This is a classic Compound Umbel form.

All the flower stems arise from a small (secondary) umbel, which themselves arise from a single point on the stem. This plant has no bracts at the junction point. This is an important point of distinction from some other related plants (many of which are weeds, and some of which are poisonous). 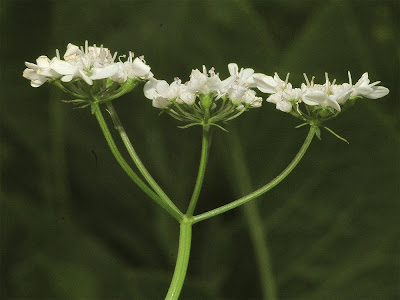 The Coriander is described as follows: an annual herb in the family Apiaceae. Coriander is native to southwestern Asia west to north Africa. It is a soft, hairless plant growing to 50 cm [20 in.] tall. The leaves are variable in shape, broadly lobed at the base of the plant, and slender and feathery higher on the flowering stems. The flowers are borne in small umbels, white or very pale pink, asymmetrical, with the petals pointing away from the centre of the umbel longer (5-6 mm) than those pointing to the middle of the umbel (only 1-3 mm long). The fruit is a globular dry schizocarp 3-5 mm diameter.
Coriander flowers are asymmetrical
petals longer on the outside of umbel.
This image below shows the secondary umbel - with the flower supports (pedicels) all coming from a single point. There are a few (only) bracts subtending the joint structure. This is a point of difference from other related plants, many of which have prominent bracts at this junction point. 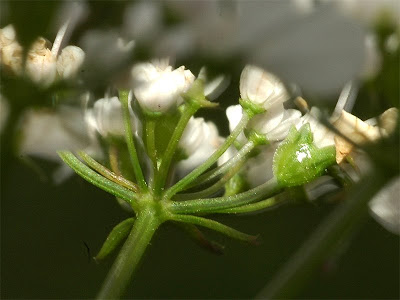 Brings back memories of my botany classes at tech.

Hi Mosura
Thanks
There is something fascinating about the natural "architecture" of flowers.
Cheers
Denis