Isopogon flowers at the Barren Grounds

Last week I went to the Barren Grounds, and while there I took some photos of several Isopogon plants. Both were in flower on the same day, but they were different species. These plants are not rare, but they are interesting to examine in some detail.

The flower heads ("inflorescence") are very interesting in their construction. As a result of this, they are very popular with plant photographers. At the bud stage their elaborate makes them a perfect subject to point a camera at. The black scales visible between each bud are the tips of the bracts between each individual flower. 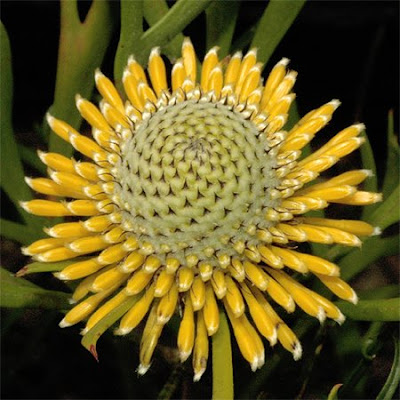 That shot clearly shows the "fibonacci spirals" (two intersecting spiral lines - one shallow one, and the other much steeper) which allow for the plant head to grow without rupturing open along a single weak line. There has been much written about the mathematical relationships of the number of segments in these intersecting lines. The lines are known as "Fibonacci Spirals". They have been discussed on this blog, previously (using the same plant to demonstrate the point).

The Sydney Botanical Gardens botanists describe the flower heads and individual flowers as follows:
I must confess to being frustrated regularly by the botanists' use of the phrase "more or less" (represented by the ± symbol in the quotes above), but I know for every hard rule one might like to draw about plants, there seems to be an exception. That's why it happens to be so hard to describe plants with clear rules. And there are few families of plants for which this is truer than for the Proteaceae. Indeed that fact was recognised by the Carl Linnaeus (yes, the original plant-naming guy himself) who named the original Protea genus after Proteus, the Greek God who was famous (in mythology) for being a "shape-changer".

The first plant to consider today is the "Broad-leaf Drumsticks" Isopogon anemonifolius. It takes its specific name for the popular spring garden flower - the Anemone, which has a distinctively broad, dissected leaf. This species is widely distributed in coast and adjacent ranges of NSW, from Ulladulla northwards. The flattened leaf segments are strongly divided towards the end of the leaf. This is clearly visible in this image. 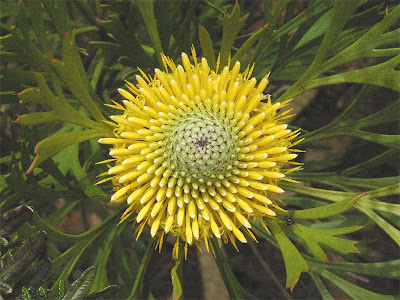 The second species is Isopogon anethifolius the "Narrow-leaf Drumsticks". It takes its name from its resemblance to the finely divided leaves of Anise (- the source of Aniseed). This plant is restricted to the Blue Mountains, the southern section of the Sydney region and along the Divide, as far south as Braidwood. The finely divided leaves are clearly visible in this image.
This plant can be confused with the related Petrophile pedunculata, which has a similar leaf and a similar distribution. However, Petrophile plants have persistent hard scaly cones, whereas the seed heads of Isopogon plants develop as a tight ball (or cone), which then disintegrate upon maturity. The seeds shed into a mass of hairy seeds. So, if in doubt look for old seed cones on the plant you are looking at. If hard scaly cones are present, you are looking at a Petrophile - if not, is is probably an Isopogon.The flowers of the second plant were clearly opening, and although this is I. anethifolius, I do not believe there is any significant variation in flower form between the two species. 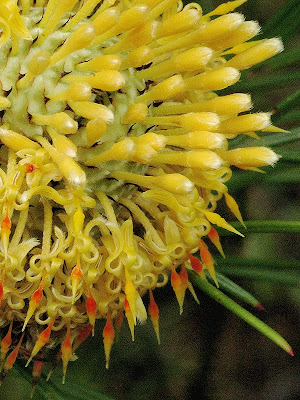 You can see the tepals curling back, leaving the prominent "style" protruding noticeably. Unlike the Waratahs and Grevilleas which I have discussed recently, these flowers are radially symmetrical ("actinomporphic"), which means the flower can be divided equally in several different planes, by passing a line along its vertical axis. By contrast, Grevilleas and Waratahs could only be divided equally into two bilateral planes (left and right). Those plants have curved flowers, can only be split notionally into equal left and right halves.

Isopogon flowers curl back to four parts, more or less equally (the "tepals" twist around a bit - but the four-way split is clear). This is visible in the following image, which is simply two flowers from the image above "cleaned up" (thanks to a bit of Photoshop work) by removing other flowers from the background. 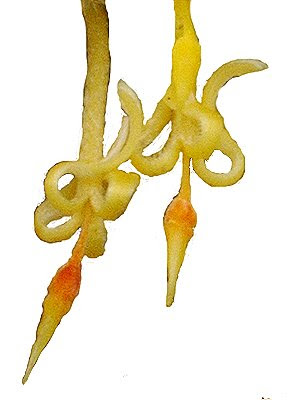 And now for one of those little surprises which occur when examining one's flower images when processing them for blogging. I found a small fly - in the image of the I. anemonifolius (Image 2 above - go back and have a look - it is there, barely visible, under the right side of the flower). 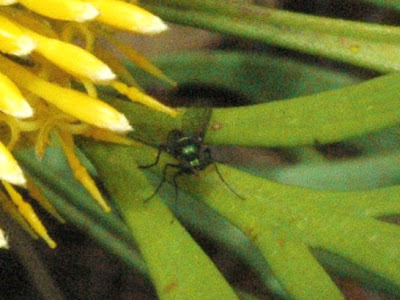 With the obvious green head and green eyes, it is probably a Dolichopidid Fly, which have a strong metallic sheen about them. They are not plant pollinators, but rather predate on smaller soft-bodied insects. According to Peter Chew's website, the Green Long-legged Fly habitually rests on leaves, just as this little guy is doing.

If I had seen the fly when I was taking the photo, I would have tried for a clearer image.
.
.
Posted by Denis Wilson at 9:12 pm

Lovely flowers and the detail you give is always interesting.

Nice plants, nice photos Denis. It often happens that we see something unexpected when the images are up on the screen, perhaps we should examine everything through a glass before clicking the shutter. Not as silly as it sounds perhaps.

Wonderful plants. It's been a while since I've seen them. Nice write up too. I'll come back later and read it again more slowly to take it all in.

Hi Mick, Mosura and Duncan.
Thanks for the comments.
Duncan, I find flower spiders the hardest to see. They love Ground Orchids, and the number of times I have gone home, then found a flower spider lurking in my image is maddening. I use the flash and a very small aperture for many photos - and that shows up the hidden creatures, often. I should be more observant!
Cheers
Denis