I mentioned the other day that the Spring season has transitioned to a stage where birds are busy feeding their babies. Here is a family of Wood Ducks, with 6 ducklings going for a walk, a bit close to a main road, but the parents seem to know what they are doing. 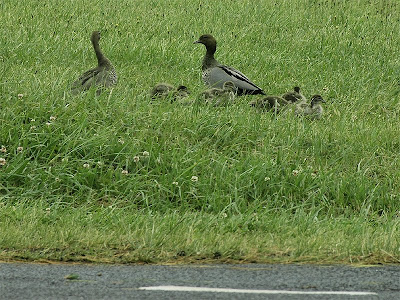 I now know a bit more about the responsibilities of parenthood. I have adopted a baby Magpie. 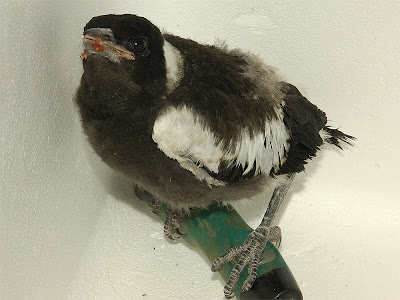 I was aware of the nesting pair of Magpies at the back of the CTC building. Indeed I mentioned the presence of this Magpie's nest in the minutes of the CTC Management Committee, in case the parents got a bit "protective", and started swooping passers by. They didn't, as it turned out.

However, on Saturday, when we had huge winds here in Robertson, one of the chicks fell out of the nest. It was fully feathered, but not yet able to fly. Close, but not yet ready.

Anyway, I found this little chick on the ground, under the Pine Tree where the nest was located. The branch was a long, nearly horizontal branch, and the nest was flung around in the wind, and one of the chicks fell out. I found it, and tried to let the adult birds know the baby was "down". No success. I decided to throw it up and over a low flat branch of the Pine Tree - hoping the youngster could land on a platform of pine branches. That worked, eventually.

However, the next morning the chick was down on the ground again. As this area is popular with people walking their dogs, I figured the chick had no chance of survival, without intervention. So, I brought it home, and stuck it in foam box. As it is quite well feathered, it can self-regulate its temperature, and so has a pretty good chance of survival.

I have since added an old lamb's wool slipper, for it to sit on. 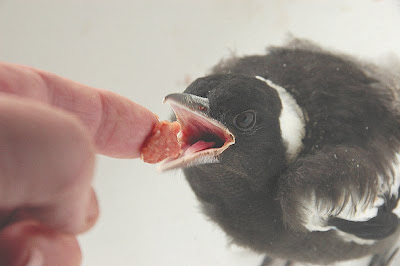 Feeding this bird has also been a learning experience for me. For some silly reason, I expected the bird to peck at the food in my hand. That's didn't work. Then I realised I needed to think like a Magpie chick. It is used to having food presented to it, from above. So I put some mince on my finger, and brought it down from above. Bingo! It opened its beak wide to receive the food. Not exactly a passive action, but it cannot "hunt" or even "peck" at food. But when food is presented from above (the position where Mum and Dad arrive and present it food) then it knows full well what to do.

So that's the arrangement we have at present. I provide food. It opens up, squawks a bit (which Lena the Schnauzer thinks is very interesting) and then it swallows the food.

In this next image, you can clearly see the tongue structure of a typical "perching bird", with the tongue being relatively hard (almost plastic-like), and triangular in shape, with two strong points pointing backwards. This helps the bird to swallow food. As much of the food which birds eat is "live", it helps ensure the prey does not escape. 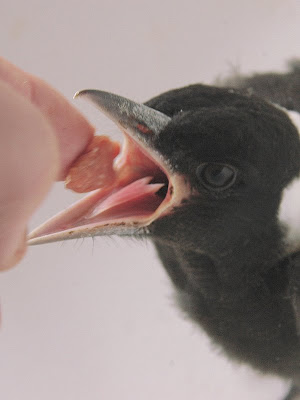 This linked article explains this, and mentions that some other birds have different specialised tongue shapes. I know that Cockatoos have a thick, rounded, blunt tongue, which allows them to position a seed against the tips of their bills, to "shell" the hard coatings.

It is worth watching a Cockatoo eating, if you get the chance. However, if you have a friend with a pet Corella, watch out. It will try to eat your fingers. My friend George has a Long-billed Corella, "Pierre", who is very keen on biting my fingers. But it means you can see his thick, blunt, grey tongue. It is very flexible. Quite unlike the Magpie's tongue. 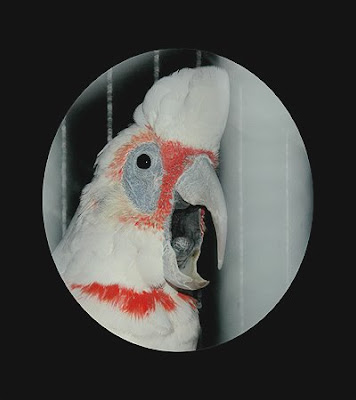 After every feeding session, the baby Magpie lifts its tail feathers, and delivers a "fecal sac". This is its "poo", but perching birds have evolved a system of packaging the excrement in a coating, which allows the parent birds to remove the sac without it fouling the nest. My baby Magpie is doing this for me, and it means there is less "mess", provided I get there quickly enough before the skin of the sac breaks down. If I am too slow, then I have to clean up the mess. 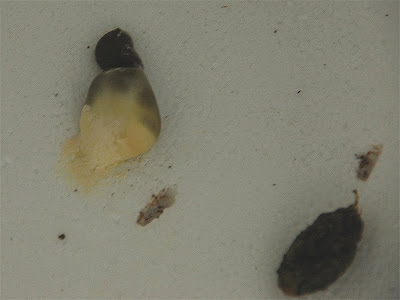 Interestingly, the Magpie also regurgitated a "pellet" which is made up of insect shells. I did not examined it in great detail, but I was surprised. It is well known that Currawongs and Owls both "throw up" indigestible material in this way. But I had not heard of Magpies doing this - but it makes sense. This is regurgitated through the mouth (beak), and is quite dry, and "clean".

I am not sure what thrills lie ahead for me with this baby Magpie. Can I teach it to fly? I hope I do not have to jump off the back deck to show it how to fly!
Posted by Denis Wilson at 8:55 pm

Nice one Denis. You're making a good mother - look out it doesn't imprint on you and you have 'cark, cark, cark" all day long!

I certainly hope that isn't the outcome.
Cheers
Denis

That's an interesting note on the backward facing points/barbs on the tongue. I wasn't aware of that.

"I hope I do not have to jump off the back deck to show it how to fly!"

If you do, could you please get it on video for us :-)