When is an Ant not an ant? When it is a Fly.

When I was at the Barren Grounds yesterday, with a group of birdwatchers, we were distracted by a strange looking Ant-like creature walking (almost running) all around the picnic table in the shelter shed there.

I could not get a good fix on what kind of creature this was, at the time. It moved fast, by walking quickly on its distinctively long legs. It looked like an Ant. But was it? Could it have been a wasp? Or even a Spider? There are Ant-mimicking Spiders, after all. 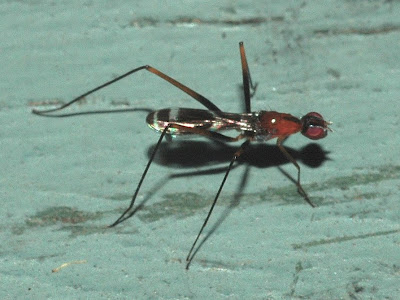 Just in case it might have been an aberrant Spider we decided to check the number of legs, and came up with an odd number - literally an odd number. It appeared to have only 5 legs, and that always makes it hard to work out what kind of creature it is, for obviously it has been damaged, as often happens in Nature. I recall a Phasmid (Stick Insect) I once found which is famous for having a "sacrificial" strategy, of losing limbs, or parts thereof, in order to allow the insect to survive attacks by birds - a similar strategy is used by Skinks, of course, which readily shed their tail tip, but can survive such an attack and even re-grow a new tip of the tail.

As someone who once thought seriously about buying a 5 cylinder Audi, I am always intrigued by such seeming imbalance. But I digress.

The clue to the identity of this creature is here. At full resolution the head shot shows a distinctive shadow (from the flash). 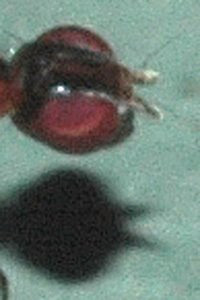 See what I mean? The v-shaped protrusion is typical of a Fly. As a matter of fact, you can even check out David's wonderful shot of a Hoverfly, and see a similar antenna structure on its face. As soon as I spotted that v-shaped shadow, I checked the positive image itself, and realised I was staring a fly's face. Even the red eyes on each side of the head became obvious as typical fly eyes (obvious once you work out what you are looking at).

But it was the shadow of the short antennae which swung it for me. You see wasps and bees (related creatures - Hymenoptera) both have prominent mid-sized antennae which are distinctively bent ("elbowed" as Peter Chew refers to it). By contrast, Flies (Diptera) have very short, straight antennae - which is what I had noticed.

From that moment on, it was simply a question of searching the available internet references.

I started with the wonderful Chew Family's Insects and Spiders of Brisbane. That took me to the prospect of it being a "Stilt-legged Fly". I followed a further link to Nick Monaghan's "Life Unseen" website. and I found that it was indeed a "Stilt-legged Fly" - indeed he has a 'dead ringer' for my insect, under the name of Metopochetus sp.

In all the time we watched this creature, running around the picnic table, crossing large gaps between the rustic boards on the table, etc, it never attempted to fly. That's why we thought it was an Ant. Indeed its transparent wings were held so close to the body (not widely spread, as in many flies), that the wings simply looked like a metallic sheen on the body of the insect.

Just to help clarify the shape of the insect, I spent some time on Photoshop, removing the shadows (because I had photographed it with the flash, on a Macro setting). In a sense it was just as well I did, as it was the shadow which gave me the clue as to the identity of this creature, as I mentioned. But the true shape of the insect is more clearly visible now, once the shadows have been removed. 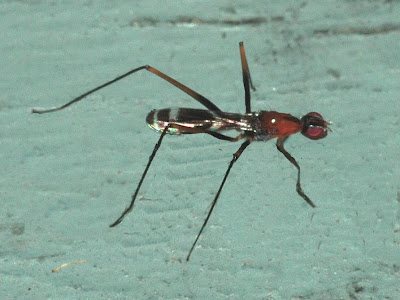 I still think it looks like an Ant - but I am convinced that it is indeed a Stilt-legged Fly.
But with 5 legs, it might just be an "Audi-fly".

By the way, it was almost impossible for me to get a really clear focus on this creature, as it ran around the picnic table. These days, I only have manual controls on my Micro lens (A control ring on the Micro lens has broken). So just consider how amazing is David's achievement to snap that hoverfly in perfect focus, when in flight? No wonder his blog is called "Focus on Nature".
Posted by Denis Wilson at 11:53 pm

That's a beauty! I've never noticed one down here yet but a quick check shows we have at least three species if that family in Tas, . Must keep an eye out.

Hi Mosura
If you wish to find one, just look for an Ant!
Cheers
Denis

That's an interesting one Denis, new to me too. By the way, I tried to comment on your utricularia post, apparently it didn't get through. Cheers, D.

Hi Duncan
Don't know what happened with the comments on the Utricularia.
I would be interested, as I found a totally different species (a tiny one) the other day, and was thinking of posting about that one as well.
Pls try to lodge a comment again - on the other post, which is still open - or else email me, off forum, with your comments. I would be happy to read your comments, and cross-reference them, in my next posting.

Incidentally, I withdrew the auto-update link to your blog, because of the hacking problem, as it was causing my blog to be blocked too, but I will renew it this afternoon. But as your comment came through to me today, obviously your have not been "blocked" - which is great news. Makes you mad, doesn't it? All that stupid stuff which goes on. People with a malicious view of the world, and nothing better to do with their imaginations. Grrr!

It is a Cactus Rot Fly... they look like Assassin Bugs.

As we do not have (naturally occurring) Cacti in Australia, that is not likely to be the case.
.
However, the insects of the world are so widely spread that our Australian Stilt-legged Flies could be related to the American "Cactus Rot Flies".
.
The Australian species are said to be in "Micropezidae". The Cactus Rot Flies are classed as members of the Neriidae family.
.
Wikipedia confirms my foregoing assumption that they are "related":
.
"Neriidae is a family of true flies (Diptera) closely related to the Micropezidae. Some species are known as cactus flies while others have been called banana stalk flies and the family was earlier treated as subfamily of the Micropezidae which are often called stilt-legged flies."
.
Thanks for your comment.
Denis Wilson